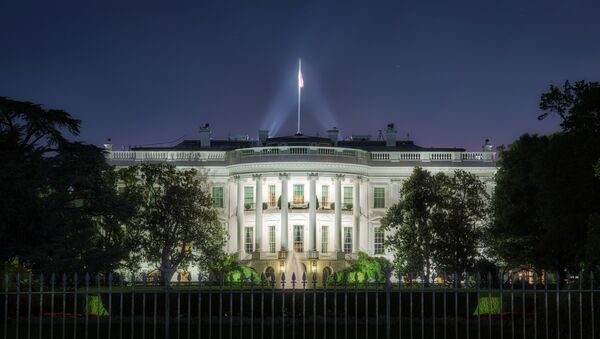 Paul Craig Roberts
All materialsWrite to the author
One might think that by now even Americans would have caught on to the constant stream of false alarms that Washington sounds in order to deceive the people into supporting its hidden agendas.

ATLANTA, September 28 (RIA Novosti) One might think that by now even Americans would have caught on to the constant stream of false alarms that Washington sounds in order to deceive the people into supporting its hidden agendas.

The public fell for the lie that the Taliban in Afghanistan are terrorists allied with al-Qaeda. Americans fought a war for 13 years that enriched Dick Cheney’s firm, Halliburton, and other private interests only to end in another Washington failure.

The public fell for the lie that Saddam Hussein in Iraq had “weapons of mass destruction” that were a threat to America and that if the US did not invade Iraq Americans risked a “mushroom cloud going up over an American city.”  With the rise of the Islamic State (IS), this  long war apparently is far from over.  Billions of dollars more in profits will pour into the coffers of the US military security complex as Washington fights those who are redrawing the false Middle East boundaries created by the British and French after WW I when the British and French seized territories of the former Ottoman Empire.

The American public fell for the lies told about Gaddafi in Libya. The formerly stable and prosperous country is now in chaos.

The American public fell for the lie that Iran has, or is building, nuclear weapons. Sanctioned and reviled by the West, Iran has shifted toward an Eastern orientation, thereby removing a principal oil producer from Western influence.

The public fell for the lie that Assad of Syria used “chemical weapons against his own people.” The jihadists that Washington sent to overthrow Assad have turned out to be, according to Washington’s propaganda, a threat to America.

Many still believe Washington’s lies, but increasingly the world sees Washington as the greatest threat to peace and life on earth. The claim that America is “exceptional and indispensable” is used to justify Washington’s right to dictate to other countries.

The casualties of Washington’s bombings are invariably civilians, and the deaths will produce more recruits for IS. Already there are calls for Washington to reintroduce “boots on the ground” in Iraq.  Otherwise, Western civilization is doomed, and our heads will be cut off. The newly created propaganda of a “Russian threat” requires more NATO spending and more military bases on Russia’s borders.  A “quick reaction force” is being created to respond to a nonexistent threat of a Russian invasion of the Baltics, Poland, and Europe.

Usually it takes the American public a year, or two, three, or four to realize that it has been deceived by lies and propaganda, but by that time the public has swallowed a new set of lies and propaganda and is all concerned about the latest “threat.”  The American public seems incapable of understanding that just as the first, second, third, fourth, and fifth, threat was a hoax, so is the sixth threat, and so will be the seventh, eighth, and ninth.

Moreover, none of these American military attacks on other countries have resulted in a better situation, as Vladimir Putin honestly states.  Yet, the public and its representatives in Congress support each new military adventure despite the record of deception and failure.

Perhaps if Americans were taught their true history in place of idealistic fairy tales, they would be less gullible and less susceptible to government propaganda.  I have recommended Oliver Stone and Peter Kuznick’s The Untold History of the US, Howard Zinn’s  A People’s History of the US,  and now I recommend Stephen Kinzer’s  The Brothers, the story of the long rule of John Foster and Allen Dulles over the State Department and CIA and their demonization of reformist governments that they often succeeded in overthrowing. Kinzer’s history of the Dulles brothers’ plots to overthrow six governments provides insight into how Washington operates today.

The Dulles brothers overthrew Guatemala’s popular president Arbenz, because his land reform threatened the interest of the Dulles brothers’ Sullivan & Cromwell law firm’s United Fruit Company client. The brothers launched an amazing disinformation campaign depicting Arbenz as a dangerous communist who was a threat to Western civilization.  The brothers enlisted dictators such as Somoza in Nicaragua and Batista in Cuba against Arbenz. The CIA organized air strikes and an invasion force.  But nothing could happen until Arbenz’s strong support among the people in Guatemala could be shattered.  The brothers arranged this through Cardinal Spellman, who enlisted Archbishop Rossell y Arellano. “A pastoral letter was read on April 9, 1954 in all Guatemalan churches.”

A masterpiece of propaganda, the pastoral letter misrepresented Arbenz as a dangerous communist who was the enemy of all Guatemalans.  False radio broadcasts produced a fake reality of freedom fighter victories and army defections.  Arbenz asked
the UN to send fact finders, but Washington prevented that from happening.  American journalists, with the exception of James Reston, supported the lies. Washington threatened and bought off Guatemala’s senior military commanders, who forced Arbenz to resign.  The CIA’s chosen and well paid “liberator,” Col. Castillo Armas, was installed as Arbenz’s successor.

We recently witnessed a similar operation in Ukraine.

President Eisenhower thanked the CIA for averting “a Communist beachhead in our hemisphere,” and Secretary of State John Foster Dulles gave a national TV and radio address in which he declared that the events in Guatemala “expose the evil purpose of the Kremlin.”  This despite the uncontested fact that the only outside power operating in Guatemala was the Dulles brothers.

What had really happened is that a democratic and reformist government was overthrown because it compensated United Fruit Company for the nationalization of the company’s fallow land at a value listed by the company on its tax returns. America’s leading law firm or perhaps more accurately, America’s foreign policy-maker, Sullivan & Cromwell, had no intention of permitting a democratic government to prevail over the interests of the law firm’s client, especially when senior partners of the firm controlled both overt and covert US foreign policy.  The two brothers, whose family members were invested in the United Fruit Company, simply applied the resources of the CIA, State Department, and US media to the protection of their private interests.  The extraordinary gullibility of the American people, the corrupt American media,  and the indoctrinated and impotent Congress allowed the Dulles brothers to succeed in overthrowing a democracy.

Keep in mind that this use of the US government in behalf of private interests occurred 60 years ago long before the corrupt Clinton, George W. Bush, and Obama regimes. And no doubt in earlier times as well.

The Dulles brothers next intended victim was Ho Chi Minh. Ho, a nationalist leader, asked for America’s help in freeing Vietnam from French colonial rule. But John Foster Dulles, a self-righteous anti-communist, miscast Ho as a Communist Threat who was springing the domino theory on the Western innocents.  Nationalism and anti-colonialism, Foster declared, were merely a cloak for communist subversion.

Paul Kattenburg, the State Department desk officer for Vietnam suggested that instead of war, the US should give Ho $500 million in reconstruction aid to rebuild the country from war and French misrule, which would free Ho from dependence on Russian and Chinese support, and, thereby, influence. Ho appealed to Washington several times, but the demonic inflexibility of the Dulles brothers prevented any sensible response. Instead, the hysteria whipped-up over the “communist threat” by the Dulles brothers landed the United States in the long, costly, fiasco known as the Vietnam War.  Kattenburg later wrote that it was suicidal for the US “to cut out its eyes and ears, to castrate its analytic capacity, to shut itself off from the truth because of blind prejudice.”  Unfortunately for Americans and the world, castrated analytic capacity is Washington’s strongest suit.

The Dulles brothers’ next targets were President Sukarno of Indonesia, Prime Minister Patrice Lumumba of Congo, and Fidel Castro.  The plot against Castro was such a disastrous failure that it cost Allen Dulles his job.  President Kennedy lost confidence in the agency and told his brother Bobby that after his reelection he was going to break the CIA into a thousand pieces.  When President Kennedy removed Allen Dulles, the CIA understood the threat and struck first.

Warren Nutter, my Ph.D. dissertation chairman, later Assistant Secretary of Defense for International Security Affairs, taught his students that for the US government to maintain the people’s trust, which democracy requires, the government’s policies must be affirmations of our principles and be openly communicated to the people.  Hidden agendas, such as those of the Dulles brothers and the Clinton, Bush and Obama regimes, must rely on secrecy and manipulation and, thereby, arouse the distrust of the people.  If Americans are too brainwashed to notice, many foreign nationals are not.

The US government’s secret agendas have cost Americans and many peoples in the world tremendously. Essentially, the Foster brothers created the Cold War with their secret agendas and anti-communist hysteria. Secret agendas committed Americans to long, costly, and unnecessary wars in Vietnam and the Middle East.  Secret CIA and military agendas intending regime change in Cuba were blocked by President John F. Kennedy and resulted in the assassination of a president, who, for all his faults, was likely to have ended the Cold War twenty years before Ronald Reagan seized the opportunity.

Secret agendas have prevailed for so long that the American people themselves are now corrupted.  As the saying goes, “a fish rots from the head.”  The rot in Washington now permeates the country.