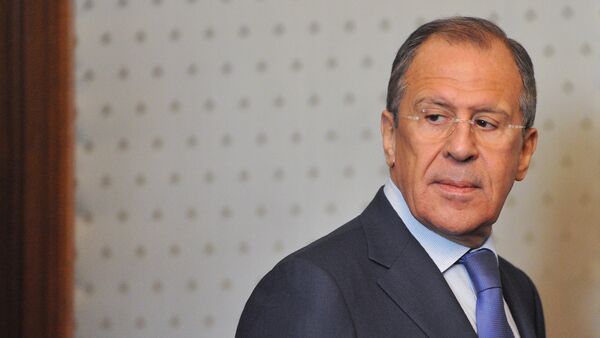 “In the end we reached a national dialogue, so far only between Kiev and two regions, but I am convinced that Ukraine needs a thorough constitutional reform,” Lavrov said.

“Nevertheless, we have reached steps which are in line with a political compromise and settlement. At the same time, we reached a point where the European Union and the Ukrainian president recognized the fairness of [Russia’s] belief; that it is necessary to wait with the enactment of provisions of the [EU-Ukraine] association agreement that affect the economic interests of Russia and other members of the CIS free trade zone. This part of the signed agreement is on pause until the end of 2015,” Lavrov added.

According to the minister, all this, however, could have been settled in last November.

“Yanukovych, by and large, asked for the exact same thing. He did not want to dismiss the signing of the agreement. Rather, he wanted to take some more time in order to analyze the economic consequences . . . we ended up at the same place, but at the cost of thousands of lives, massive destruction and a Europe-wide crisis.”

The Ukraine-EU Association Agreement is a treaty that presupposes political and economic association between its signatories. The political provisions of the agreement were signed in March, after the then president Viktor Yanukovych was ousted and an interim government came to power. The economic part of the agreement was signed by the current president of Ukraine Petro Poroshenko in June.

Early in September, Russia, Ukraine and the European Union reached a compromise on Kiev's free trade pact with the EU, postponing its entry into force until the end of 2015. The deal was reached during trilateral talks in Brussels, which were convened after Moscow had expressed concerns about the economic risks the implementation of the association agreement could bring both to Russia and Ukraine.