Lavrov: Syria Needs Involvement in Fight Against IS Terrorism 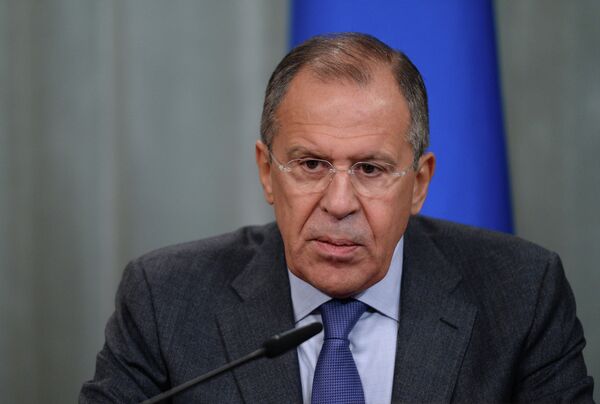 Disengagement of Syria in the fight against terrorism is illogical and the political process should not become hostage to ideology, Russian Foreign Minister Sergei Lavrov said in an interview to Bloomberg TV.

NEW YORK, September 28 (RIA Novosti) - Disengagement of Syria in the fight against terrorism is illogical and the political process should not become hostage to ideology, Russian Foreign Minister Sergei Lavrov said in an interview to Bloomberg TV.

Lavrov noted that he had discussed the topic a few days earlier with US Secretary of State John Kerry during the UN General Assembly meetings in New York.

"I strongly believe that we have to engage Syria and we have to engage Syrian government, including the fight against terrorism. But also, we have to stop putting preconditions to the beginning of national dialogue in Syria. And preconditions put forward by our Western friends, being, 'Assad must go before anything happens'," Lavrov said in response to a question concerning the level of contacts between Washington and Damascus.

"When the chemical weapon elimination program was discussed and then agreed and implemented, there were almost daily meetings in The Hague, in the headquarters of this organization on (UNINTEL) chemical weapons. Experts from Russia, US, Syria and the secretariat of this organization, they were meeting and working as a team. So, I see no reason why the same approach couldn't be used to fighting terrorism on Syrian territory and eventually to resolving the political situation in Syria," said the minister.

Russia agreed to a deal with the United States on disarming Syria's chemical arsenal last year, which averted US military strikes against the country leading the minister to call Us President Barack Obama's current refusal to work with Syria "not logical at all."

Earlier this month, Obama revealed a strategy to defeat the Islamic State (IS) extremist group, also known as the Islamic State of Iraq and Greater Syria (ISIS) and the Islamic State of Iraq and the Levant (ISIL), which seized swaths of territory in both Iraq and Syria this year. The United States expanded its operations against the IS to Syria on September 26 launching airstrikes on areas controlled by IS militants. In an effort to halt the ongoing conflict, the United States also plans to provide equipment and training to Kurdish and Iraqi forces army and Syria's moderate opposition.