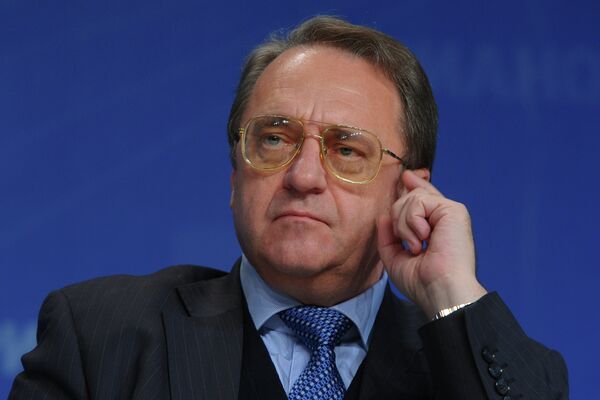 © RIA Novosti . Vladimir Trefilov
/
Go to the mediabank
Subscribe
International
India
Africa
It is necessary to work together with all partners in fighting against Islamic State (IS), primarily, with governments of Syria and Iraq, Deputy Minister of Foreign Affairs of Russia Mikhail Bogdanov told "Kommersant" newspaper Monday.

MOSCOW, September 29 (RIA Novosti) - It is necessary to work together with all partners in fighting against Islamic State (IS), primarily, with governments of Syria and Iraq, Deputy Minister of Foreign Affairs of Russia Mikhail Bogdanov told "Kommersant" newspaper Monday.

"The Islamic State of Iraq and the Levant (ISIL) group and terrorism in the Middle East in general are our common threats; these are the threats to the whole international community. We should make consolidated efforts together with all our partners, and primarily, of course, with the states of this region – governments of Iraq and Syria," Bogdanov said.

Diplomat noted that the Islamic State poses a threat to the Russians as well, given the fact that there are Russian citizens among the IS members.

"Citizens of many countries are fighting there, from 70 or 80 states. Everybody is concerned with the fact that these people go there and then come back. They are trained there, acquire certain skills, therefore they pose a considerable threat to the national security of their countries of origin. At the same time, they have passports, the ones of Western countries in particular, which provides them with an opportunity to move freely around the world without visas and additional checking. It is extremely dangerous," Bogdanov added.

Earlier this month, US President Barack Obama revealed a strategy to defeat IS. Having carried out a military force operation in Iraq, the United States expanded its operations against IS to Syria on September 26, launching airstrikes on areas controlled by IS militants. In an effort to halt the ongoing conflict, the United States also plans to provide equipment and training to Kurdish and Iraqi forces army and Syria's moderate opposition.