Peace March in Ukraine: ‘They Did Not Let Us Speak Against War’ 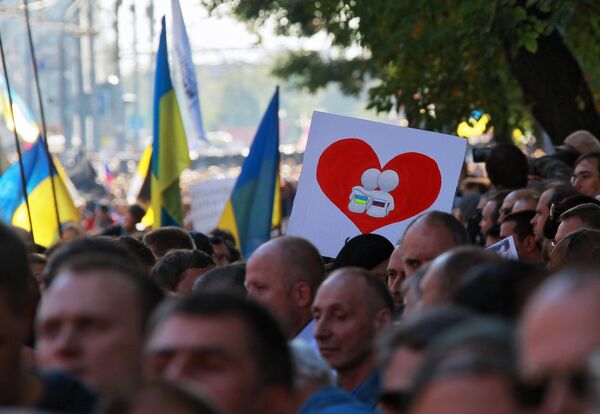 © RIA Novosti . Vitaly Belousov
/
Go to the photo bank
Subscribe
A "March of Peace" was held in the largest cities in Ukraine, which called for an end of the "blind war", conducted by Kiev southeast the country. Hundreds of activists came onto the streets of Kiev, Odesa, Kharkiv, Dnipropetrovsk, Zaporizhia and others.

MOSCOW, September 27 (RIA Novosti) - A "March of Peace" was held in the largest cities in Ukraine, which called for an end of the "blind war", conducted by Kiev southeast the country. Hundreds of activists came onto the streets of Kiev, Odessa, Kharkiv, Dnipropetrovsk, Zaporizhia and others.

In some cities, however, the march had hardly begun when it was already over. The police dispersed and arrested the activists, while the representatives of the Right Sector made it clear that they would not let the peace protest happen.

"Unfortunately, the march did not take place today; they did not let us hold it," this is how Natalya Kovshar, second secretary of Kharkiv's city committee of the Ukrainian communist party, started her conversation with RIA Novosti.

The activist stated that they had asked for permission in advance, and "everything was permitted". Nevertheless, the adviser to the Head of Ukraine's Interior Office, later said that the march had been banned by the authorities. He also stated that the police warned the residents against the participation by promising to take rigid action if they attended the Saturday march in Kharkiv.

"Once the activists came to take part in the march, the police surrounded the people and "started to forcefully drag them into the buses and take them to the regional department of the Interior Ministry," Kovshar stated. According to police records, around 100 people came to the march of which 23 were taken under arrest.

According to records by Ukraine's Interior Ministry in Kharkiv, tanks are currently patrolling the streets of the city.

"The police, SSU and the Right Sector are violently dispersing the march. We have asked for permission, but they turned us down; we keep on applying," Igor Sysoenko, chairman of the all-Ukrainian non-governmental organization "Youth, Society and Power", told RIA Novosti on the phone.

According to Sysoenko, they arrested him in Zaporizhia and threatened "to break his arms and legs". They also took away his car.

"About 1,500 people came to Zaporizhia. They were not allowed to speak against war. It feels they support war," he added.

The march in Odesa gathered 1,500 participants. According to activist Oleg Negaturov, it did not take place because of the representatives of the Right Sector, who were present.

"People started joining the peaceful protest, but they were not allowed to start it; representatives of the Right Sector appeared immediately. The police were passive," he said.

According to Negaturov, while there was no fighting, verbal altercation happened.

"People wanted to march across the main streets of the city, but they were not allowed," Negaturov continued.

In the meantime, the march in Kiev was not hindered by the representatives of the Right Sector. The march turned out to be the largest. According to the Ukrainian TV channel "5", around 3,000 people came to take part in the protest. They marched along Khreshchatyk up to Maidan Nezalezhnosti (Independence Square), calling for peace and unity.

Among the participants of the march were Paralympic champions, community activists, political statesmen as well as soldiers, who had returned from the zone of special operations in Donbas. The main goal and demand of the activists were to end the war in the east of Ukraine.

Activists were also able to march for peace in Dnipropetrovsk, where more than 1,000 people took part.

In April, the Ukrainian authorities launched a military operation against the pro-independence movement of the country's southeast, who were against the illegitimate government, brought on by the coup this February.

A ceasefire agreement between Kiev and independence supporters in eastern Ukraine was established on September 5 during a meeting of the trilateral Contact Group on Ukraine in Minsk.

On September 20, the Contact Group drew up a memorandum of nine provisions that would regulate the implementation of the ceasefire agreement.