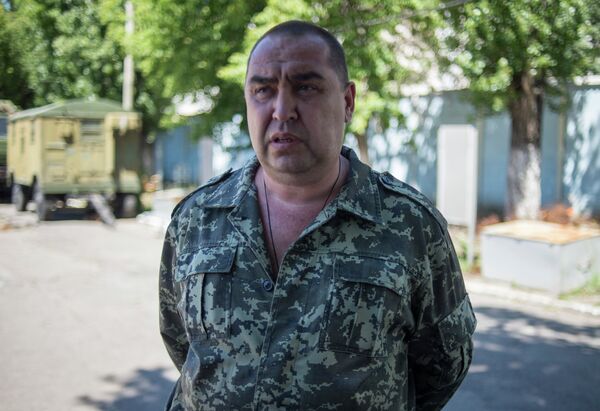 "It will be right, when the people express their will. It will be a legal act, and no one will ever be able to say that something is wrong, and any party, including the Kiev authorities, will have difficulty doubting the legitimacy of the LPR authorities," Plotnitsky said.

On Friday, representatives of the LPR announced the establishment of the Central Election Commission in addition to an election scheduled for November 2 to vote on deputies and a head of LPR.

Plotnitsky noted that during the upcoming elections, voters will be able to participate in various ways including via e-mail and telegrams. Early voting will also be conducted.

According Plotnitsky, voters residing in areas controlled by Ukrainian forces as well as refugees located in other regions of Ukraine and Russia will be able to vote. Refugees who have fled to Russia will have the opportunity to vote in the election in Rostov, Voronezh, and Belgorod.

According to the regional governor of the Luhansk region, Gennady Moskal, the area governed by LPR is inhabited by 64.4 percent of the region's population.

Kiev authorities and independence supporters of eastern Ukraine aligned positions on a ceasefire and a number of issues concerning the status of the Donetsk and Luhansk regions on September 5 at a Contact Group meeting in the Belarusian capital of Minsk, as outlined in the Minsk Protocol.

Following the protocol, Ukraine's parliament, the Verkhovna Rada, approved a law granting special status to parts of the Donetsk and Luhansk regions on September 16. The protocol also suggests that the law should allow early elections of the heads of the self-proclaimed people's republics of Luhansk and Donetsk.