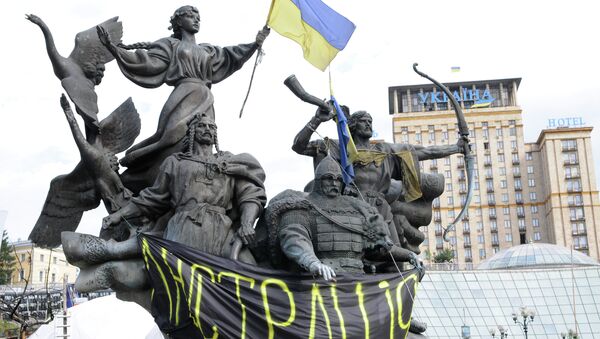 The word "lustration" is derived from the Latin "lustratio," meaning "cleansing."

The bill is an attempt to restore confidence in authorities and create conditions for reshaping the government to meet European standards.

It passed the Verkhovna Rada in its first reading on August 14 with 252 votes, 26 more than was needed.

On September 16, the Verkhovna Rada adopted the law in its second and final reading on the third attempt. After the first abortive attempt, members of parliament (MPs) tried to take the bill up again, but fell a few votes short. Rada Speaker Oleksandr Turchynov announced that the MPs would not leave the hall until it passed, which it did with just five more votes than the required 226. One of the bill's co-sponsors said that by the second reading, MPs had introduced about 400 amendments.

On September 25, Turchynov signed the bill and submitted it to the president for approval. The screening of government officials was one of Maidan's principal demands. Last February, activists drew up criteria for selecting members of the "government of national confidence." A potential candidate must not be among Ukraine's 100 wealthiest people, occupy a senior position in the executive branch, be a former government employee under Yanukovych or be accused of human rights violations or corruption.

The law requires candidates to be screened before being appointed to government positions. Officials that were in office from February 25, 2010, to February 22, 2014, failed to pass the screening, including Ukraine's president, prime minister, ministers and heads of the Security Service, the Prosecutor-General's Office and the National Bank.

Candidates must have at least five years of experience in management positions and at least seven years of service in government agencies with the exception of the Interior Ministry, the Security Service and the Defense Ministry.

According to Ukraine's Prime Minister Arseniy Yatsenyuk, 1 million government officials and law-enforcement employees, including "all government ministers – the entire power vertical," would be screened under the law.

Passage of the law was met by rallies outside the Verkhovna Rada. On August 14, several hundred people demanding screening of government officials blocked traffic on the streets adjacent to the parliament building. They chanted and beat drums. Stands with photos of MPs were set up by the main entrance to the parliament building to record whether they would vote for the law or not.

Nearby stood a hastily erected guillotine with a trident, symbolizing the process of cleansing the ranks of government.

On September 16, about 150 people rallied by the parliament building in support of vetting government officials. They had Ukrainian national flags, flags with Svoboda logos and posters demanding the cleansing of government. Some threatened to stage another Maidan if this were not done.

Police clashed with supporters of the extremist Right Sector demanding the vetting of Ukrainian officials. Several dozen activists tried to break through the police cordon at the main entrance of the building. They started throwing eggs at police and tried to drag a dumpster toward the building, but the police managed to hold them back.

Demonstrators set fire to car tires piled up in the middle of Grushevskogo Street.

Following passage of the screening law, activists tore down about 10 meters of metal fence behind the parliament building, threw smoke bombs, and set off fireworks.

On September 25, Volodymyr Vovchenko, a representative of the Cherkassk Region Rada where he was formerly the first deputy speaker, was tossed into a dumpster by activists. They did the same to Oleksandr Kharlamov, a regional council deputy and member of Ukraine's Communist Party. Activists insist that Kharlamov should not be allowed to run for the Verkhovna Rada and have called on him to withdraw from the race.