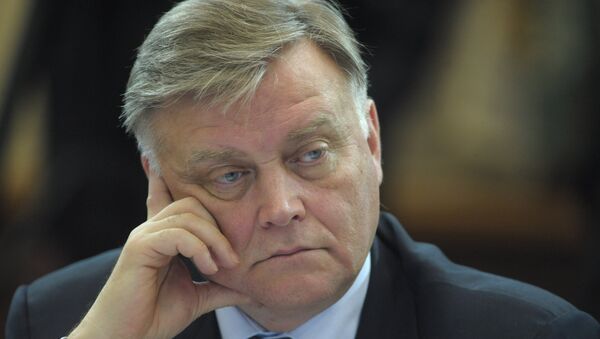 © RIA Novosti . Sergey Guneev
/
Go to the mediabank
Subscribe
International
India
Africa
The President of the state-run monopoly Russian Railways, Vladimir Yakunin, spoke to Rossiya Segodnya on Friday, touching on subjects including the ongoing crisis in Ukraine and its effect on the company, the new round of Western-imposed sanctions, exciting new projects which are being undertaken by the railway giant, and more. The head of the multi-billion dollar company noted that while recent sanctions may have affected his options when it comes to tourism, cooperation with Western partners continues.

The President of the state-run monopoly Russian Railways, Vladimir Yakunin, spoke to Rossiya Segodnya on Friday, touching on subjects including the ongoing crisis in Ukraine and its effect on the company, the new round of Western-imposed sanctions, exciting new projects which are being undertaken by the railway giant, and more. The head of the multi-billion dollar company noted that while recent sanctions have affected his options when it comes to tourism, cooperation with Western partners continues.

With respect to the ongoing crisis in and around Ukraine, Yakunin admitted that both Ukrainian Railways and Russian Railways have been seriously affected, noting that "passenger traffic is down by 70 percent, and this is affecting the operations of [the company’s long-distance passenger division] in the most serious way. Because of this, we have seen an abrupt discontinuation of previously-observed growth trends in passenger turnover.”

Yakunin has also noted that because of the conflict, Russia has not been able to receive its order of locomotives from Luhanskteplovoz (Luhansk Locomotive Works), and faces other problems obtaining parts from Ukraine’s locomotive industry.

However, Yakunin noted that despite the present difficulties, Ukrainian and Russian railways are continuing to cooperate. He noted that Russian Railways is continuing its cooperation with Ukrainian, Austrian and Slovakian companies on a 450-kilometer, 8 billion USD project to develop the Košice - Vienna broad-gauge line. Russia’s railway network utilizes 1,520 mm broad-gauge tracks which are wider than the tracks used in most of Europe. By extending the broad-gauge track from Košice in Eastern Slovakia to Vienna, Russian Railways train cars will no longer have to be fitted with new bogies when travelling between Europe and Russia. This will reduce cargo delivery times from Asia to Europe and back to 15 days.

“All the procedures envisaged by the business plan are being fulfilled. All four participants are still participating in this project. I think that this project will be [implemented],” Yakunin said.

Speaking about the effects of the armed conflict in the east of Ukraine and their effect on the Ukrainian economy more generally, Yakunin noted that "for Ukraine [the problems] are, of course, stunningly huge, as these regions are industrialized.”

“This is not just an attempt to complicate the economic situation in Russia and exert political pressure on the leadership of our country. The hidden motive behind all this is to create invisible but impassable barriers between Europe and Russia,” Yakunin said.

Focusing on the sanctions’ effect on the company, he noted that of course the "sanctions themselves are unpleasant, because they are also affecting the company. Sanctions were imposed on access to financial markets. Does this affect the company? It does, in the most direct way."

Talking about relations with European colleagues in the railway industry, Yakunin stated that "within the railroad community, everything continues in a really friendly and benevolent manner. No tensions have ever arisen inside the railroad community and are not arising now. Even though they [the partners] are under serious pressure. I know for a fact that the ministries of foreign affairs of the European countries are beginning to place blame on them because they actively work with Russian Railways."

Yakunin says the company continues to maintain a friendly dialogue with its European partners. "For example, I received a [congratulatory] letter from the head of the French railways and the head of Siemens. And why shouldn't it be so? We have a joint venture with Siemens, and they have invested a large sum of money," Yakunin said.

When asked about whether he has personally been affected by the latest round of sanctions, Yakunin recalled that he is on the US and Australian blacklists of individuals, but not on those of the EU countries. With respect to the Australian sanctions, he joked that the restrictions mean that he “won't get to see kangaroos.” As for alleged property he has in the United States which is set to be seized, Yakunin noted that “the property that they want to seize...cannot be found.”

Yakunin also noted that VTB Bank, where he keeps all his money, has been affected by restrictions on Western capital markets.

"I keep my money in VTB Bank. I will not disclose the sum. But all my savings, which are considerable enough, are in VTB, which is being targeted by the sanctions. I believe that we are all a part of our country. And the fate of our country is our fate too," Yakunin said.

Speaking about the company’s new construction projects, Yakunin noted that among the most exciting was the development of Russia’s high-speed rail network. "I am deeply convinced that the project must be realized,” Yakunin said.

The head of the railways also added that a significant outlay of funds would be necessary to realize the project. “To start [the project] today, we will need an investment of 20 billion rubles... Without this amount, the project will remain only a wish," he said. Yakunin noted that despite the high initial investment, the grandiose project will have paid for itself within 15 years of operation. He added that the Ministry of Economic Development is on board with the project.

Yakunin also noted that talks with European and Chinese partners on the development of high-speed rail connections are ongoing, and that he has high hopes for their realization.

Discussing the recent proposal to create a bridge across the Kerch Strait, which would connect Crimea with the Russian mainland, Yakunin noted that the bridge can be adapted to high speed trains traveling at 200 km/h.

“The bridge [across the Kerch Strait] currently being draft is combined: it features both a road bridge and a double-track railway bridge. It will not be intended for high-speed rail traffic. However, it can be quite easily adapted for speeds of 200 kilometers per hour. It is not an unsolvable problem. But we will need serious enough investments, to put it softly, to create the infrastructure and approaches for high speeds travel,” Yakunin said.

Russian Railways’ new projects department has already been ordered by the Ministry of Transport to create a rail link to the Kerch Strait bridge approach, Yakunin added.

"The work, in fact, is already underway. Naturally, everything will depend on the further development of the financial situation, but at least we have the task," Yakunin noted.

The bridge, which is slated to open sometime between 2018 and 2020, has a projected cost about 288 billion rubles, or 5.9 billion USD. The length of the crossing will be about 19 kilometers, and the bridge will include a four lane highway, as well as two railway tracks. A contractor for the project has yet to be chosen.

When asked about accusations of corruption and his political opponents’ allegations of his supposedly fabulous lifestyle, Yakunin responded that, “this is an absolutely conscious effort that has been aimed at discrediting me by specially chosen people ... Of course, this irritates me.”

Yakunin also brushed off the description of him as a “tycoon”, noting that a tycoon “is an owner of property who has a direct influence on politics,” whereas he is “an employee of a state-run company.”

Speaking about the upcoming FIFA World Cup tournament which will be held across 12 Russian cities in 2018, Yakunin noted that Russian Railways would develop additional railway infrastructure that would allow World Cup-goers to move from point to point within a matter of five hours, or eight to nine hours by night train.

"Under presently existing conditions, specific adjustments [in the rail services] are likely to occur. But these adjustments should be in line with the volume of passengers that we would have to carry, and in line with specific...locations, because [railway services] will also be changed according to the number of venues that will host such [FIFA] events," Yakunin noted.