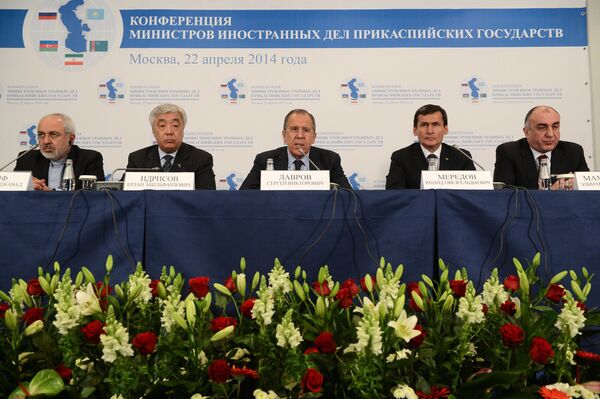 "A political statement was prepared for the [Caspian] summit containing a provision about preventing military presence of non-regional states in the Caspian Sea. There were difficult consultations on the issue, but the sides managed to agree on this principle," Yury Ushakov said.

He said the Caspian Sea states have also made serious progress in preparing a convention on the legal status of the Caspian Sea and it may be signed at their next summit in Kazakhstan in 2015.

"A serious progress was made, we are nearing a breakthrough in preparing a convention on the legal status of the Caspian Sea," the Russian official said.

The summit of the so-called Caspian Five — Russia, Azerbaijan, Iran, Kazakhstan and Turkmenistan — is expected to build on a decade of talks aimed at carving up the Caspian sea.

For decades, the inland sea was the exclusive domain of the USSR and Iran, but after the collapse of the Soviet Union, new players emerged to claim an interest in the region.

The Caspian Sea is the largest landlocked body of water in the world. Large fishery resources, as well as vast oil and gas deposits have made the Caspian Sea a subject of territorial negotiations among Russia, Iran, Azerbaijan, Kazakhstan and Turkmenistan.