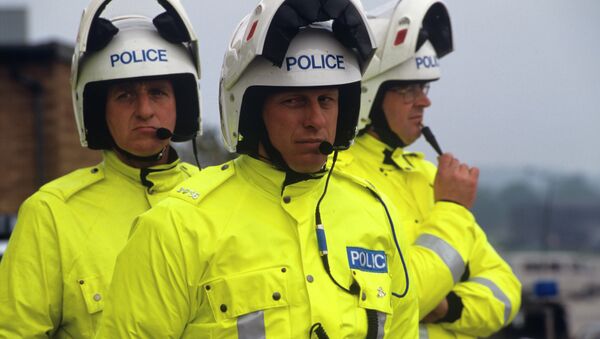 © Sputnik / Vladimir Rodionov
/
Go to the mediabank
Subscribe
International
India
Africa
Anjem Choudary, a radical Islamist preacher was arrested in London on September 25 during a police terror raid, along with eight other men between 22 and 51 years of age.

MOSCOW, September 25 (RIA Novosti), Ekaterina Blinova - Anjem Choudary, a radical Islamist preacher was arrested in London on September 25 during a police terror raid, along with eight other men between 22 and 51 years of age.

"Mr. Choudary, 47, a lawyer, has established a reputation for being careful to stay on the right side of the law when he makes controversial comments about race relations and religion. He has long-standing links with Omar Bakri Mohammed, the hate preacher who was involved in Al-Muhajiroun and another controversial group, Hizb ut-Tahrir," the Telegraph writes.

The media outlet reports that on Thursday morning, September 25, Anjem Choudary had posted a series of tweets "with an anti-Western tone", in which he expressed his discontent with air strikes on the Islamic State's targets in Syria and Iraq and stressed that the US attacks "would be a "rallying call" for Muslims to support the group":

FACT: The Islamic State could not wish for a better rallying call for Muslims worldwide to join them than for the USA to start bombing again

FACT: US/UK interest in Syria/Iraq is not to defend people but to establish their own economic military strategic and ideological interests

FACT: The US/UK will never defeat the Islamic State by bombs from the air, rather they will yet again murder innocent men, women & children!

The Daily Mail points out that earlier this week, Choudary claimed he had "no sympathy for Alan Henning," an aid worker captured by ISIL fighters in Syria, whom jihadists had threatened to behead. The media outlet cites Choudary as saying, reportedly: "In the Koran it is not allowed for you to feel sorry for non-Muslims. I don't feel sorry for him."

The radical Sharia scholar was among nine men arrested on Thursday during the operation carried out by 'SO15,' the Met's Special Operations Counter-Terrorism Command. The BBC notes that police have not disclosed the details of the raid, stating that the men were arrested "on suspicion of being members of a proscribed organization, supporting a proscribed organization contrary to Section 11 and 12 of the Terrorism Act 2000 and encouraging terrorism, contrary to Section 1 of the Terrorism Act 2006."

"These arrests and searches are part of an ongoing investigation into Islamist-related terrorism and are not in response to any immediate public safety risk," a police spokesperson emphasized as cited by the Daily Mail.

The arrested suspects are being held at police stations in London, according to the BBC.