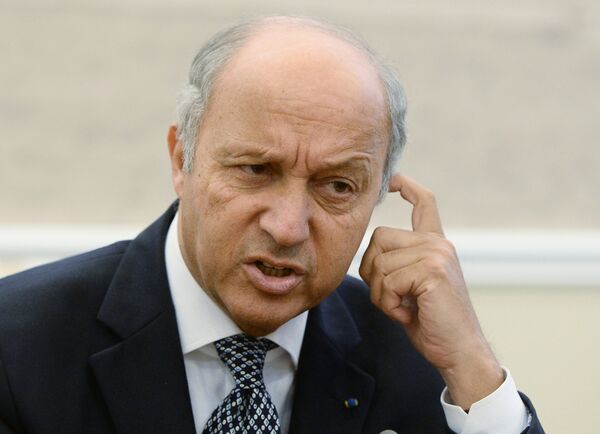 © RIA Novosti
/
Go to the photo bank
Subscribe
French Foreign Minister Laurent Fabius has condemned the execution of a French hostage carried out by Algerian jihadists linked to the Islamic State (IS) group in an interview to France Info radio Thursday.

PARIS, September 25 (RIA Novosti) – French Foreign Minister Laurent Fabius has condemned the execution of a French hostage carried out by Algerian jihadists linked to the Islamic State (IS) group in an interview to France Info radio Thursday.

"This is an infamy, because those, who have done it, who are linked to the Daech [IS] group … [see] absolutely no value in a life. They want to terrorize us, and thus [our] reaction must be exactly opposite. We have to extremely firmly condemn what has happened, keep calm and do everything to find and punish them [the terrorists]," the minister said.

Algerian terrorist group Jund al-Khalifah, which pledged allegiance to the IS, abducted French citizen Herve Gourdel on September 21, releasing footage of the hostage demanding that French President Francois Hollande stop the country's participation in a military operation against the IS in Iraq.

French officials confirmed the authenticity of the video but refused to end the country's involvement in the operation, stressing that Paris does not negotiate with terrorists.

On Wednesday the terrorists published another video, this time showing the beheading of Gourdel.

Earlier, the IS also seized and beheaded US journalists James Foley and Steven Sotloff and British aid worker David Haines.

Washington launched airstrikes against IS jihadists on the Iraqi territory in August, following the group's advance in northern Iraq and Syria. France said its Air Force joined the anti-IS airstrikes in Iraq. Military action countering the IS has continued, with the United States and its allies carrying out strikes in Syria earlier in the week.