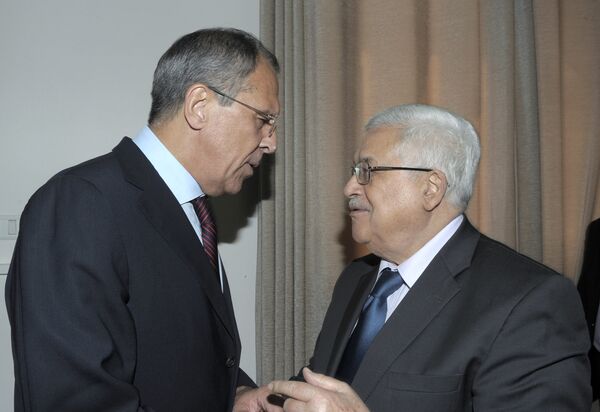 Lavrov and Abbas met on the sidelines of the 69th Regular Session of the UN General Assembly in New York.

"Lavrov stressed that Russia will continue to promote the resumption of a full-fledged Palestinian-Israeli negotiation process in various multilateral formats, first of all within the framework of the Middle East Quartet of international mediators," a statement released by the Russian Foreign Ministry Wednesday says.

According to the statement, Lavrov and Abbas also confirmed the importance of the August 26 open truce agreements reached between Israel and the Palestinian Authority. The Palestinian leader praised Russia's humanitarian assistance to Palestinians who have been affected by the conflict.

On August 26 the Palestinian Authority and Israel with the mediation of the Egyptian government agreed to an open-ended truce. The agreement envisaged Israel opening border crossings to allow humanitarian aid and construction materials to enter Gaza Strip, as well as extending the permitted fishing zone.

Moreover, the Rafah border crossing between Gaza Strip and Egypt was also to be opened. The parties also agreed to continue talks within a month.