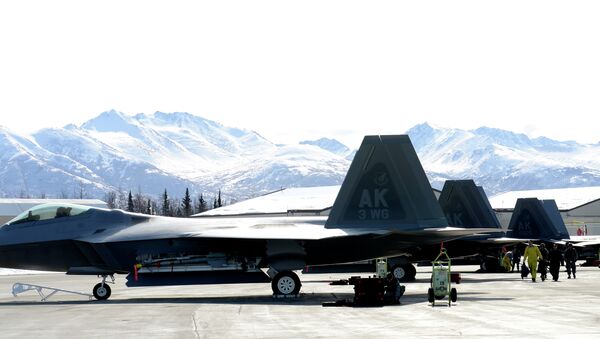 © Joint Base Elmendorf-Richardson
Subscribe
The use of fifth generation US stealth F-22 Raptor fighters against the Islamic State (IS) terrorist organization in Syria is Washington’s attempt to appease critics of the costly stealth plane, military aviation blogger and author of “The Aviationist” David Cenciotti told RIA Novosti Wednesday.

MOSCOW, September 24 (RIA Novosti), Daria Chernyshova - The use of fifth generation US stealth F-22 Raptor fighters against the Islamic State (IS) terrorist organization in Syria is Washington’s attempt to appease critics of the costly stealth plane, military aviation blogger and author of “The Aviationist” David Cenciotti told RIA Novosti Wednesday.

“The US has invested a lot in the F-22 Raptor and the US Air Force has worked so much in the last few years to turn the troubled, expensive interceptor into a real multi-role platform that could be eventually used in a real operation,” Cenciotti said outlining several reasons for the use F-22 against the IS.

He stressed that some stealth jets have been deployed to Al Dhafra for years, “so they were already pre-positioned in theater and ready for action.”

“Conflicts have always been a marketing opportunity to ‘advertise’ and/or test old and new weapons systems; in this case it was also the chance to appease those who criticized the costly stealth plane and the fact it was never used in combat (until yesterday),” David Cenciotti explained.

“F-22s were useful because of their ability to enter, probably undetected, an anti-access target area, gather details about the enemy systems with its extremely advanced onboard sensors, escort other unstealthy planes and, last but not least, attack their own targets with 1,000-pound GBU-32 JDAMs. In recent exercises, F-22s flew dual missions that they will probably fly over Syria as well: HVAAE (High Value Air Asset Escort) and air-to-surface, providing the capability to perform an immediate restrike on the same target (or one nearby), if needed,” the expert concluded.

US President Barack Obama said Wednesday that there can be no negotiations with a brand of evil such as the Islamic State, only the language of force.

“ISIL must be degraded and ultimately destroyed," Obama said in an address to the UN General Assembly. “Innocent children have been gunned down, religious minorities starved to death, innocent human beings beheaded. No grievance justifies these actions.”

So he pledged to support Iraqis and Syrians “fighting to reclaim their communities,” and to use America’s military might “in a campaign of air strikes to roll back ISIL.”