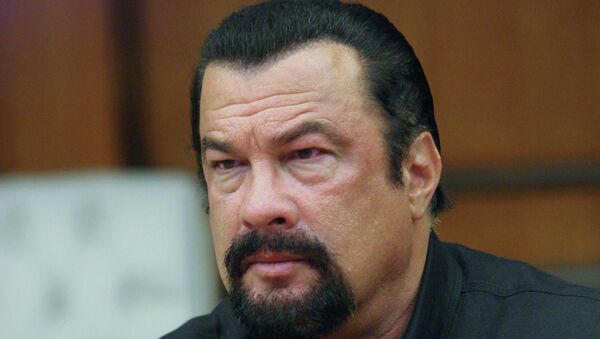 "At the moment we [Kalashnikov Concern] do not have plans to invite Steven Seagal as the ambassador of the brand. Right now we are at the final stage of creating our new brand, and we are paying more attention to that," the company's press service was quoted as saying by the newspaper.

Negotiations between Kalashnikov and Seagal began in January, according to Izvestia. At the time of the preliminary discussions, it was believed that the American actor, in his role as brand ambassador, would strengthen the company's popularity in the United States. However, talks did not continue and preliminary agreements or contacts were not made.

The representatives of Kalashnikov have not excluded the possibility of recruiting an ambassador who would attract markets in Asia, Africa, and Latin America, specific candidates have not been discussed. The company plans to launch its new brand in November.

Kalashnikov is the leading Russian developer and manufacturer of automatic and sniper combat weapons, guided artillery ammunition, and a wide range of civilian products, including shotguns and sporting rifles, as well as machines and tools. Kalashnikov Concern was created in August 2013 when manufacturers Izhmash and Izhevsk merged and were formally renamed after the series of assault rifles. The company is fully owned by Rostec, Russia's state technologies corporation.

On September 12, the United States and European Union (EU) imposed a new batch of sanctions on Russia. The sanctions include a ban on exports from Kalashnikov Concern. The sanctions against Russia were introduced as a response to its alleged involvement in the situation in Ukraine which Russia has repeatedly denied.