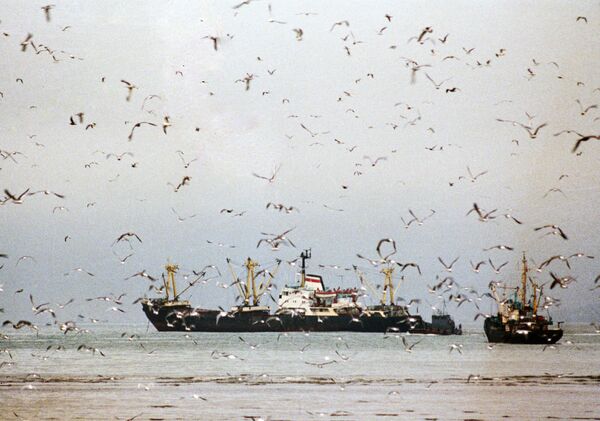 © RIA Novosti . V. Kiselev
/
Go to the photo bank
Subscribe
A Chinese ship has been seized by North Korea for illegally fishing in the Yellow Sea, reports Yonhap News.

MOSCOW, September 23 (RIA Novosti) – A Chinese ship has been seized by North Korea for illegally fishing in the Yellow Sea, reports Yonhap News.

The Chinese ship, named “Liaowayu 55090”, with six crew members aboard, was seized on September 12 while fishing in the Yellow Sea. After five days in detention the crew were released on September 17, Yonhap News informs.

“The crew insisted that their boat did not enter North Korean waters, not to mention crossing the line for fishing”, the Chinese ship owner Zhang Xikai said, as quoted by Reuters. “They were conducting normal operations within Chinese waters when they were hijacked by North Korean personnel with guns and dragged into North Korean waters by force”, he further added.

North Korean authorities imposed a heavy fine on the Chinese ship operator, ordering them to pay a fine of 250, 000 yuan ($40, 686 USD). This was confirmed by a diplomatic source in Beijing. The Chinese Foreign Ministry is holding discussions with the North Korean embassy in Beijing on the matter, Yonhap News said.
Back in May, North Korea detained another Chinese boat with 16 crew members and demanded 600,000 yuan as a penalty. However, after Beijing and Pyongyang held talks following the incident, the Chinese detainees were released without the payment.

China has been a major supplier of food and oil to North Korea, however the Beijing-Pyongyang relationship has been tense as of lately.