Ukraine’s Delayed Association With EU: Hypocrisy Paid for With Blood 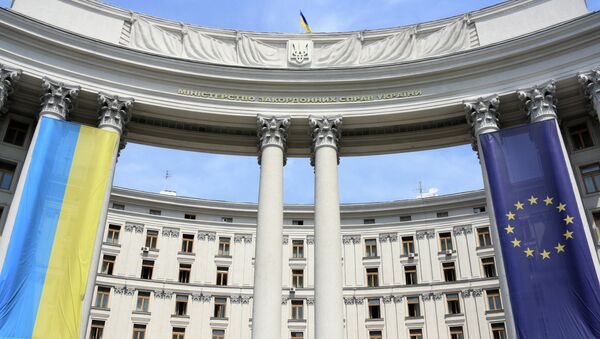 Alexander Mercouris
London-based lawyer
All materials
Since the Maidan uprising and coup, the people of Ukraine have been sick with fever; their minds are irrational and their motives are driven by madness.

LONDON, September 22 (RIA Novosti) — Since the Maidan uprising and coup, the people of Ukraine have been sick with fever; their minds are irrational and their motives are driven by madness.

The present Ukrainian crisis began on November 21, 2013 when Viktor Yanukovych, Ukraine’s democratically elected President, decided to postpone signing an association agreement with the EU to allow time for talks with Russia.

Yanukovych was right. We can say that definitely now. After all, the present Ukrainian President, Petro Poroshenko, has just done essentially the same thing. Though he has signed the association agreement and the Ukrainian parliament has ratified it, he has decided to postpone it for more than a year – until 2016 – to allow time for talks with Russia. The talks involving Russia, Ukraine and the EU, which were requested by Yanukovych in November, finally began in August in Minsk.

Though Yanukovych did the right thing, his opponents exploded. On November 21, 2013 they occupied the main square in Kiev. Ignoring court orders, they insisted on remaining there. On November 30, 2013, they broke a promise to leave and became involved in a fight with the police. On December 1 and 2, 2013 they destroyed a Christmas tree, stormed public buildings and attempted to storm the government quarter attacking police with a tractor. They continued the rioting on December 9, 2013 and in the week beginning on January 19, 2014 by starting street fights and using firearms. On 24th January 2014 they rejected an offer to form a coalition government. On February 21, 2014 they signed an agreement with Yanukovych, but went back on it within hours, storming the government quarter and declaring him overthrown.

Having overthrown Yanukovych they continued in the same uncompromising way. They formed a “national unity government” consisting of themselves. They tried to repeal a law giving the Russian language official status. They sacked the judges of the Constitutional Court. They launched a purge of officials. They rejected Ukraine’s previous policy of neutrality, which had the support of its people, and realigned Ukraine with the West and NATO against Russia. Former supporters of Yanukovych were beaten and intimidated. Newspapers and television stations were also threatened. Broadcasts from Russia were blocked.

When people in the regions protested seeking constitutional safeguards they met the same uncompromising response. Negotiations were rejected. On May 2, 2014 dozens, possibly hundreds, of people were burned to death in Odessa. On May 9, 2014 thousands were shot at indiscriminately in Mariupol. In breach of ceasefire agreements made on February 21, April 17, June 27, and July 2, 2014 a military campaign involving indiscriminate shelling of populated centres was launched. Thousands of people were killed. A whole region was devastated.

What is most extraordinary about this behaviour is its total irrationality. Presidential elections were due in March 2015, which every survey of Ukrainian opinion showed Yanukovych’s opponents would have won. The February 21, 2014 agreement gave them power and brought those elections forward to December 2014. Had they sought power in a peaceful and legal way the Ukraine they inherited would have been peaceful, united and whole.

Instead, for no clear reason, they chose to seize power violently and illegally.

The results are tragic. In place of peace and stability the country is in a state of collapse. Crimea has seceded. An unnecessary civil war has resulted in defeat. Russia has been antagonised. Russian gas is cut off. Donbas coal is lost. The economy is in freefall. Production is plunging. The currency is collapsing. Foreign exchange reserves are dwindling away. Default and financial collapse looms.

Worst of all, Ukrainians have now learned to hate and fear each other.

It would be impossible to come up with a scenario more disastrously out of proportion to its supposed cause – the postponement the EU association agreement. The very same agreement which has now again been postponed.

Defeat and crisis have had a certain sobering effect. There is a ceasefire and talks. A law offering autonomy has been passed. The fever is in remission. Whether it is enough is another matter. Probably not. One way or another Ukraine has paid a terrible price for the irrationality of some of its people.