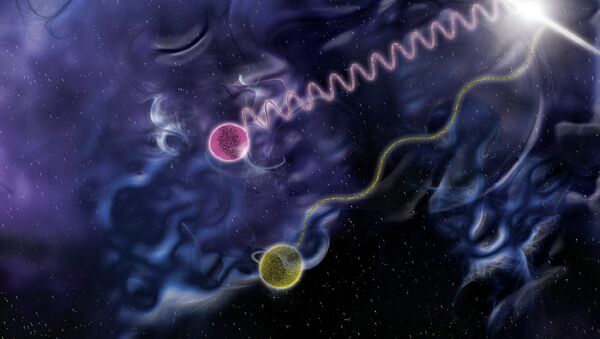 © Flickr / NASA Goddard Space Flight Center
Subscribe
International
India
Africa
A team of researchers at the University of Geneva (UNIGE) have successfully teleported the quantum state of a photon to a crystal over a distance of 25 kilometers (15.5 miles), AFP reports.

MOSCOW, September 22 (RIA Novosti) - A team of researchers at the University of Geneva (UNIGE) have successfully teleported the quantum state of a photon to a crystal over a distance of 25 kilometers (15.5 miles), AFP reports.

The current record for teleporting photons is 143 kilometers (88.8 miles), according to Forbes. Successful teleporting of information from light particles into particles of matter is what makes the UNIGE experiment unique and its results impressive. The previous record of 6 kilometers for such a transfer was set by the same team over ten years ago, in 2003.

In the UNIGE experiment, the photon and the crystal, which serves as a memory bank storing photon’s information, did not come into direct contact. One light particle in a pair of entangled photons was sent along an optical fiber, while the other one was relocated to a crystal. The first photon was then hit by a third photon; both were obliterated in the collision. However, the information that the third photon contained was not destroyed but transferred into the crystal.

“The quantum state of the two elements of light, these two entangled photons which are like two Siamese twins, is a channel that empowers the teleportation from light into matter,” said Felix Bussieres, lead author of the study, as quoted by AFP.

Quantum teleportation could have huge implications for communication via the long-distance transmission of quantum information, Felix Bussieres and his colleagues stated in an article, published in the Nature Photonics journal on Sunday. Most importantly, that transmission cannot be cracked making such means of transferring information ideal for sensitive data.

Although it is possible to transfer qubits of information through entangled atoms, teleportation of anything larger remains possible only in fiction.