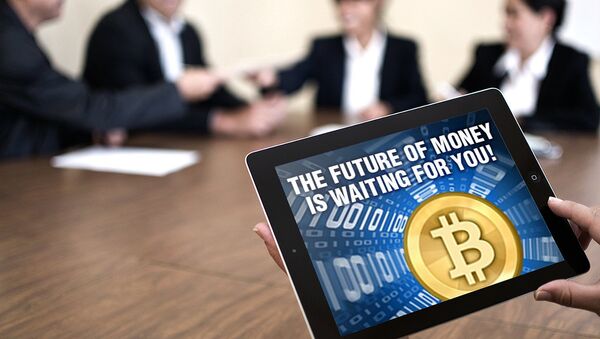 The value of Bitcoin stood at almost $400 as of Monday, September 22, with more and more people and businesses turning to the cryptocurrency because of the speed and low cost of bitcoin transactions.

MOSCOW, September 22 (RIA Novosti) – The value of Bitcoin stood at almost $400 as of Monday, September 22, with more and more people and businesses turning to the cryptocurrency because of the speed and low cost of bitcoin transactions.

Bitcoin was first introduced in 2009. Unlike the US dollar, or any other traditional currency, bitcoins aren't printed or backed by a central government. They are created by individuals and businesses using high-powered computers. Creators of bitcoins are allowed to keep some of what they create as payment for the service. The rest is sold on unregulated online exchanges.

After purchasing a bitcoin, the buyer gets two strings of numbers called a public key and a private key. For encryption and convenience purposes, the numbers are often expressed as letters and digits. The public key is the number a person must know in order to send bitcoins to a given individual. The private key is the number that only you are supposed to know. By "signing" a transaction with their private key, a user authorizes the movement of all or some of the bitcoins from their trading account, or virtual" wallet," into another.

CoinDesk, an online publication that tracks digital currencies, estimates that by the end of this year there will be eight million bitcoin "wallets," and 100,000 companies that accept bitcoins.

All bitcoin transactions are instantly published in a ledger so that anyone can keep track of the overall money supply. The ledger floats on a collaborative online document, rather than a centrally managed account. Users have adopted this mechanism for shopping, transferring money and speculation.

For users, the perceived value of Bitcoin, or any other cryptocurrency, can be compared to the price of a tool in limited supply. Demand is fueled by parties interested in peer-to-peer forms of payment that don't involve banks and other intermediaries, making such payments cheaper and faster. For investors, a cryptocurrency becomes attractive the more popular it proves to be among users.

Other virtual currencies, such as Litecoin, Namecoin, Peercoin and Ripple, have developed out of the bitcoin technology and have added improvements on that platform. Litecoin is the second-largest cryptocurrency in terms of market capitalization.

Investors don't have to mine coins or speculate on the exchanges to make money in cryptocurrencies. Some observers recommend investing in companies that use or service cryptocurrency and other peer-to-peer payment forms.

These include companies that process payments, including Colored Coins or Ripple Labs Inc., with open-source protocols that allow users to trade anything of value instantly online for virtually no cost. These companies are in the early stages of development and so, by and large, are not publicly traded.

The most notable danger associated with bitcoin transactions is fraud.

In February 2014, the world's largest bitcoin exchange, Mt. Gox declared bankruptcy, saying that it had lost nearly $473 million worth of their customer's bitcoins likely due to theft. This was equivalent to approximately 750,000 bitcoins, or about 7% of all the bitcoins in existence. Due to this crisis, the price of a bitcoin fell from a high of about $1,160 in December to under $400 in February.