Air France to Lose Up to $26 Million a Day Due to Strike: Company 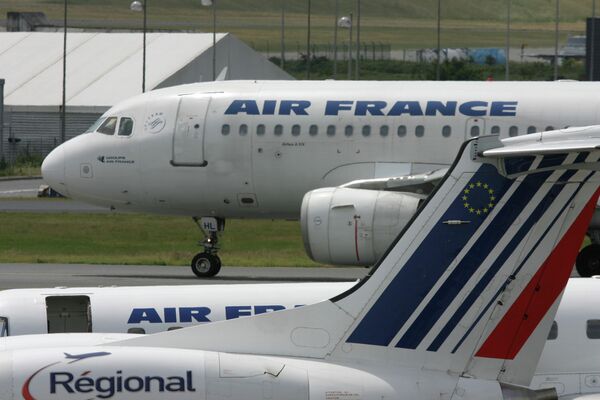 © RIA Novosti . Mihail Kutusov
/
Go to the photo bank
Subscribe
Air France said Monday that the ongoing pilots' strike could cost the company up to 20 million euros ($26 million) a day.

The company added that the number would increase after compensations for damage inflicted to clients and the cost of increased traffic flow following the strike are calculated.

According to the company, the heads of Air France and Air France-KLM Group have spent more than 40 hours in meetings with union representatives, but to no avail.

On Monday Air France offered to suspend plans to expand its budget carrier Transavia until December but SNPL, the main French pilots union, rejected the offer, describing it as a smokescreen that offered no new guarantees.

Air France said in a separate statement that it can ensure 48 percent of flights on Tuesday, the ninth day of the strike.

Only 38 percent of Air France flights operated on Sunday, and 42 percent on Monday.

It was expected that the week-long strike over Air France's plans to expand the low-cost operations of its Transavia brand by setting up foreign bases would be finished by Sunday, but SNPL voted to continue the strike until September 26.

Currently there are more than 3,700 pilots working for Air France, which exceeds the needs of the company. The company plans to send a large number of the pilots to Air France's affiliated company Hop! and Transavia, a Dutch based low-cost airline operating as an independent part of the Air France-KLM Group. Employees have agreed to the transfer, but claim that their social welfare benefits, salaries and status should remain unchanged. Pilots are also protesting against the reduction of staff.