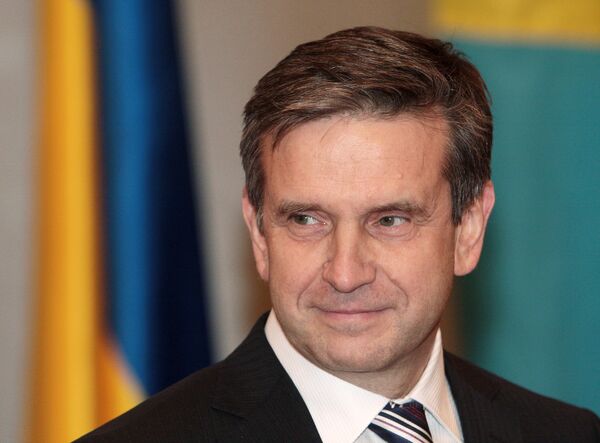 The Contact Group on the Ukrainian crisis is expecting significant progress during a new round of talks in Minsk on Friday, the Russian ambassador in Ukraine, Mikhail Zurabov said.

MINSK, September 19 (RIA Novosti) - The Contact Group on the Ukrainian crisis is expecting significant progress during a new round of talks in Minsk on Friday, the Russian ambassador in Ukraine, Mikhail Zurabov said.

"I expect that we will make a rather significant step forward," Zurabov, who represents Russia at the peace talks, said adding that "some important decisions could be adopted, which could make previous agreements more viable."

The Contact Group comprises officials from Russia, Ukraine, the self-proclaimed Donetsk and Luhansk People's republics and the Organization for Security and Co-operation in Europe (OSCE).

The group's meeting in Minsk on September 5 resulted in a fragile ceasefire between Kiev and independence supporters in eastern Ukraine.

The Friday meeting of the Contact Group will take place using the same format as the previous one, with Ukraine being represented by former president Leonid Kuchma, Russia by the ambassador to Kiev Mikhail Zurabov and the OSCE by Swiss diplomat Heidi Tagliavini, the organization's special envoy to Ukraine.

The five-month conflict in Ukraine's Donbas region has already killed over 3,000 people, according to UN estimates, and wreaked havoc on the Ukrainian economy. It has also led to the biggest confrontation between Russia and the West since the Cold War.

Kiev and the West have repeatedly accused Russia of providing Donbas independence supporters with military assistance. Moscow has denied any involvement in the internal Ukrainian conflict.