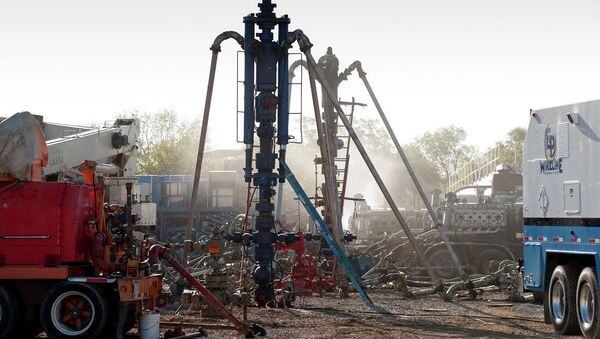 © Flickr / www_ukberri_net
Subscribe
International
India
Africa
The hotel occupancy rate is going down in Pennsylvania and other energy-dense regions in the United States where hydraulic fracturing, or fracking, is practiced, the Science 2.0 online publication reports.

MOSCOW, September 19 (RIA Novosti) – The hotel occupancy rate is going down in Pennsylvania and other energy-dense regions in the United States where hydraulic fracturing, or fracking, is practiced, the Science 2.0 online publication reports.

"Demand is still high in many of the counties in the Marcellus Shale region, but the occupancy rate is starting to come down," Daniel Mount, associate professor at the Pennsylvania State University said Thursday as quoted by Science 2.0.

"The case could be made that this is a sign that hotels were overbuilt," Mount added, noting that "It may be that the newer hotels and the hotel chains are in a better position to withstand the lower demand, in which case, it will be the older, independent hotels that go out of business."

Marcellus drilling operations generated approximately $685 million in hotel revenues and added an extra 1,600 new hotel jobs since 2006, according to reports published by the International Council on Hotel, Restaurant, and Institutional Education (ICHRIE) of the Pennsylvania State University in July.

However, the latest figures show that demand for rooms may be decreasing. In 2012, demand was flat and occupancy was down 4.1 percent, according to Science 2.0.

On Monday, a study published by the Proceedings of the National Academy of Sciences, revealed that drinking water supplies in Texas and Pennsylvania suffer from regular natural gas contamination, resulting from leaks caused faulty cement casing on natural gas wells.

The authors of the study noted that "horizontal drilling and hydraulic fracturing have enhanced energy production but raised concerns about drinking-water contamination and other environmental impacts."

Hydraulic fracturing, or fracking, is a technique for recovering gas and oil from shale rock by drilling down into the ground and injecting water, sand and chemicals into the rock at high pressures, releasing gas to the head of the well.

The method has triggered a surge in US gas production, but raised fears that breaking up rock formations underground using toxic solutions could cause water pollution.

The US Environmental Protection Agency is in the midst of a years-long study into the impacts of fracking on drinking water, and is scheduled to release a draft this year, after reports of drinking water so badly contaminated that homeowners could light it on fire.

Fracking is also reported to be the cause of hazardous air pollution and earthquakes, resulting from the process of injecting fracking solutions into the ground.