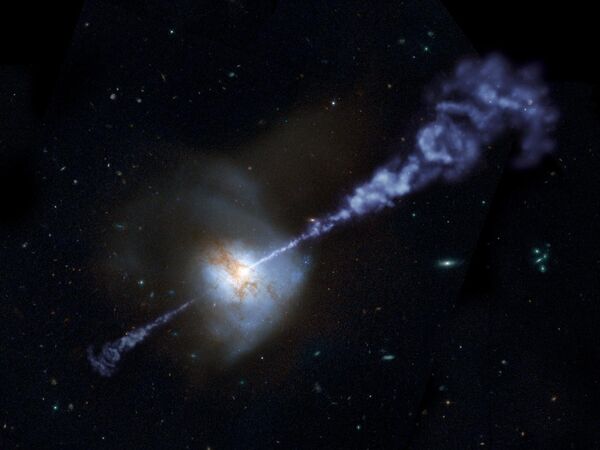 © NASA/JPL-Caltech
Subscribe
An international team of scientists have discovered a supermassive black hole inside one of the tiniest galaxies known: M60-UCD1, NASA reports

MOSCOW, September 19 (RIA Novosti) - An international team of scientists have discovered a supermassive black hole inside one of the tiniest galaxies known: M60-UCD1, NASA reports. The black hole - described by NASA as "supermassive" or a "monster" – has five times the mass of the black hole at the center of our Milky Way galaxy.

"We don’t know of any other way you could make a black hole so big in an object this small," said University of Utah astronomer Anil Seth, the lead author of an international study on the dwarf galaxy which was published in the journal Nature.

Half of the mass of M60-UCD1 galaxy is concentrated in its central area, which has a diameter of 160 light-years. According to the scientists, M60-UCD1 "crams 140 million stars within a diameter of about 300 light-years which is only 1/500th" the diameter of the Milky Way galaxy.

The team of astronomers used the Hubble Space Telescope and the Gemini North optical and infrared telescope on Hawaii’s Mauna Kea to observe M60-UCD1 and measure its mass, diameter and dynamics.

The finding implies that there could be many other dense galaxies in the universe with supermassive black holes. Moreover, the scientists believe that dwarf galaxies could be stripped remnants of larger galaxies which were torn apart as a result of collisions between galaxies.

According to the astronomers, M60-UCD1 will eventually merge with the M60 galaxy, which also contains a supermassive black hole. When that happens, both black holes are also likely to merge.