Ukraine Has No Facilities, Materials and Means To Produce Nuclear Weapons 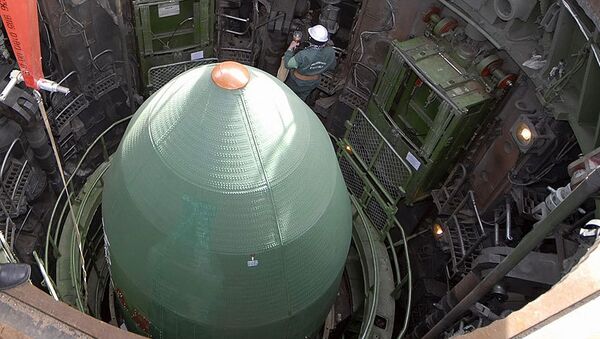 Ukraine has no facilities, none of the necessary materials and no means to produce nuclear weapons, Executive Director of the Vienna Center for Disarmament and Non-Proliferation, Elena Sokova told RIA Novosti Thursday.

MOSCOW, September 18 (RIA Novosti) - Ukraine has no facilities, none of the necessary materials and no means to produce nuclear weapons, Executive Director of the Vienna Center for Disarmament and Non-Proliferation, Elena Sokova told RIA Novosti Thursday.

"Ukraine has no facilities to produce fissile materials for weapons. It does not have stocks of nuclear materials of weapons quality either," Sokova said.

"Most importantly, the political costs of going nuclear would be detrimental to Ukraine. The subsequent economic costs would also be huge," she added.

At the beginning of September, Ukrainian Prime Minister Arseniy Yatsenyuk said that Ukraine had decided to construct new nuclear facilities on its territory. Ukrainian Defense Minister Valery Geletey also said that the country plans to revise its non-nuclear status and thus protect itself from further attempts to violate its sovereignty.

Various international experts, however, questioned the above statements.

Sokov argued that nuclear weapons production in Ukraine is possible in theory, but in reality it would take a lot of time and money, which Ukraine does not have.

"All this can be done, in theory. I do not know how long, 10 years or 5; no serious expert will give an estimate, I suppose. Of greater consequence are two facts. First, this will require massive resources, financial first of all. A weapons program requires a large-scale experimental effort and then industrial construction. It does not have these resources and there will be no international assistance, I cannot imagine any bona fide state giving Ukraine the money to design and produce nuclear weapons," Sokov explained.

Sokov also added that no one wants another nuclear state and that the West will strongly oppose Ukraine's initiative, and highlighted that the statements made by the Ukrainian government are highly unprofessional.

"Nuclear weapons do not have a role in the ongoing crisis (except perhaps in a very remote, indirect way, which can be disregarded for all practical purposes). The talk about nuclear weapons that we hear from Ukraine these days is ill-advised, highly unprofessional …It actually discredits the Ukrainian government, nothing else," Sokov concluded.

Earlier this week, Russian Deputy Foreign Minister Sergei Ryabkov confirmed that Ukraine's non-nuclear status, sealed in the Nuclear Non-Proliferation Treaty (NPT) cannot be revised and said that all talks on this matter are baseless.