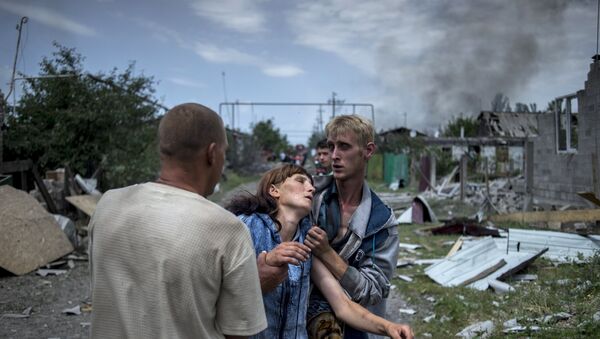 "Ukraine's closest friends have the most effective voices to speak with the Ukrainian leadership about human rights concerns, and the Obama administration shouldn't miss this opportunity," Hugh Williamson, Europe and Central Asia director at Human Rights Watch said Thursday, as quoted by the organization.

"Obama should press Poroshenko for a commitment to stop using Grad rockets in areas where civilians live," Human Rights Watch said Thursday, noting that "Ukraine's president should also promise to investigate indiscriminate attacks thoroughly and effectively and to commit publicly to justice for victims of serious violations of international law, irrespective of which party is responsible."

Ukrainian President Petro Poroshenko is expected to request US military and economic assistance in an address to Congress and a meeting with US President Barack Obama later on Thursday. Poroshenko was invited to Washington by Obama and is to become the second Ukrainian leader to address the US Congress. Ukraine's President Viktor Yushchenko spoke before the Congress's joint meeting in April 2005.

According to the White House press service, Obama and Poroshenko will discuss ways of pursuing a diplomatic resolution of the conflict between the Ukrainian government and pro-independence forces of Ukraine's southeastern regions.

The United Nations estimates that the conflict in eastern Ukraine, which started in mid-April, when Kiev launched a military operation against independence supporters who refused to recognize the newly-installed Kiev government, has killed over 2,000 people and injured over 3,000, many of them civilians.