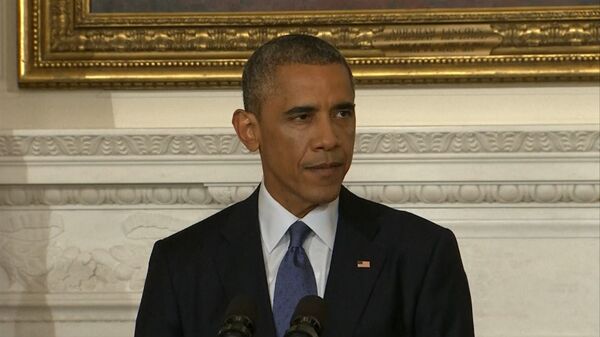 US President Barack Obama said late on Thursday Washington will arm and train Syrian rebels to effectively oppose the violent Islamic State (also known as the Islamic State of Iraq and the Levant – ISIL) insurgency.

“We had already ramped up our assistance, including military assistance, to the Syrian opposition. With this new effort, we’ll provide training and equipment to help them grow stronger and take on ISIL terrorists inside Syria,” Obama said in a statement on the passage of his bill in the Congress.

“This program will be hosted outside of Syria, in partnership with Arab countries, and it will be matched by our increasing support for Iraqi government and Kurdish forces in Iraq,” Obama explained.

The American president added that more than 40 countries offered to help in the fight against IS.

“More than 40 countries - including Arab nations - have now offered assistance as part of this coalition. This includes support for Iraqi forces, strengthening the Iraqi government, providing humanitarian aid to Iraqi civilians, and doing their part in the fight against ISIL,” Obama said.

Last week, US President Barack Obama announced a strategy to counter the IS threat, implying the creation of a broad anti-IS coalition.

The IS is a Sunni jihadi group that has been fighting the Syrian government since 2012. In June 2014, it launched an offensive in Iraq, seizing vast areas in both countries and announcing the establishment of an Islamic caliphate on the territories under its control.