Hollande: Conditions for Mistral Delivery to Russia Can be Met But Not at Current Stage 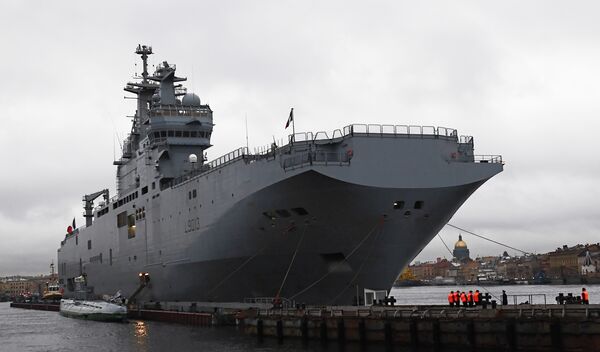 © RIA Novosti . Alexey Danichev
/
Go to the photo bank
Subscribe
The conditions, under which the first Mistral helicopter carrier will be shipped to Russia, can be met, but they are not in place yet, French President Francois Hollande said at a press conference Thursday.

PARIS, September 18 (RIA Novosti) -The conditions, under which the first Mistral helicopter carrier will be shipped to Russia, can be met, but they are not in place yet, French President Francois Hollande said at a press conference Thursday.

"If the process of peace settlement [of the Ukrainian crisis] is completed, if the ceasefire is permanent, then the first Mistral can be shipped, the contract can be fulfilled, " Hollande said, adding that the situation had not got to that point yet.

The completion of the deal has been at risk since Western countries began the imposition of sanctions against Russia over its alleged role in the escalation of the Ukrainian crisis. However, DCNS has insisted that the sanctions would not prevent the construction and transfer of the Mistral ships.

Early in September the office of President Francois Hollande released a statement saying that the head of the country concluded that the conditions under which France could authorize the delivery of the first helicopter carrier are not in place. However, a French diplomatic source told RIA Novosti that the delivery of the ship had not been put off and that the president's statement did not have any legal consequences.

Later that week, Hollande said he would make a final decision on the delivery of two Mistral-class helicopters carriers by the end of October based on the situation in eastern Ukraine.