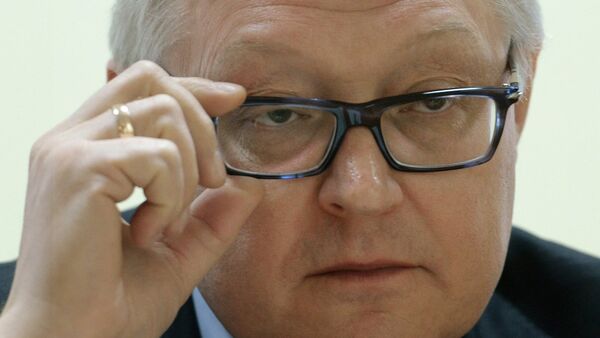 © Sputnik / Valeriy Melnikov
/
Go to the photo bank
Subscribe
The future of the Arak heavy water nuclear reactor remains one of the main obstacles at the nuclear talks between the P5+1 group of mediators and Tehran, Russian Deputy Foreign Minister Sergei Ryabkov told RIA Novosti Thursday.

“The issue of the Arak reactor is among the main stumbling blocks,” the diplomat said ahead of the coordinating meeting of the sextet of international mediators in New York.

The problem of Iran's nuclear centrifuges also remains an issue of concern, according to Ryabkov. The diplomat noted that during the previous rounds of Iranian nuclear talks the negotiators agreed that Iran has to limit its uranium enrichment to five percent.

The Russian deputy foreign minister said that he had a number of bilateral meetings with members of the sextet and the Iranian side. A coordinating meeting among the nations of the P5+1 group - China, France, Germany, Russia, the United Kingdom and the United States - is due to take place later on Thursday, on the eve of the next round of nuclear talks, according to Ryabkov.

“It feels like there is a common understanding that every effort has to be made to reach an agreement,” the diplomat said.

“Flexibility is needed to form a framework, a carcass of agreement. As of the Russian delegation, we have this flexibility, but also our ‘red lines’, which is normal,” Ryabkov added.

The new round of nuclear negotiations between Iran's political leadership and the 5+1 group is due to take place in New York on September 18-22.

On November 24, 2013, an action plan was adopted in Geneva, according to which Iran and the so-called P5+1 international mediation group had to reach an agreement that would guarantee the peaceful nature of Tehran’s nuclear program in exchange for lifting international sanctions previously imposed on Iran.

The document has to be signed within a year of the Geneva Accord, which gives the parties until November 24, 2014, to reach a final agreement.