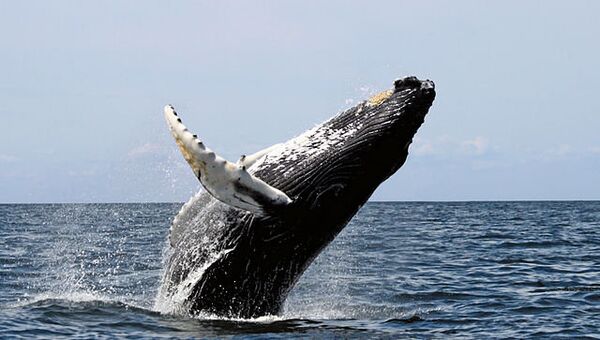 Diplomats gathering at the biennial International Whaling Commission (IWC) meeting held September 11-18 in Slovenia have yet to reach a consensus between whaling nations and those opposed to the practice, the Guardian reported on Wednesday.

MOSCOW, September 17 (RIA Novosti) – Diplomats gathering at the biennial International Whaling Commission (IWC) meeting held September 11-18 in Slovenia have yet to reach a consensus between whaling nations and those opposed to the practice, the Guardian reported on Wednesday.

"There may be a way of threading the needle, but it will require some give on both sides and we have to find out whether people are prepared to do that," a key diplomatic source was quoted as saying by the newspaper.

"The trade-off is on the one hand, Japan accepting that the commission has a role to play, and on the other hand, a recognition that this isn't just a one-year deal. It is not all about 2015, but looking at the longer term," the source added.

So far, New Zealand has come up with a proposal monitoring and regulating "scientific whaling" notorious in countries such as Japan as an excuse for whale slaughter. The proposal aims to restrict the number of whales culled and encourage research through non-lethal options.

Though Japan halted its "scientific whaling" program for one year following the March ruling from the International Court of Justice, it has announced its intent to continue whale hunting in 2015. Should New Zealand's proposal be approved, Japan will be forced to halt "scientific whaling" until IWC's scientific committee and the commission itself sign off on the program, which would not occur until the next summit in 2016.

"Both sides would have to step back from their positions and come together around what should be a straightforward issue but has really become mixed up in the politics of scientific whaling," Gerard van Bohemen, the head of the New Zealand delegation was quoted as saying by the Guardian.

Most NGOs and conservationists favor a more robust environmental regime than has been proposed so far, while Japan refuses to reform. Despite the decrease of whale meat consumption in Japan, the country continues to use it as a point to allow whaling by highlighting the trade's profitability.

No proposal is expected to be established and agreed upon by the commission until Thursday.