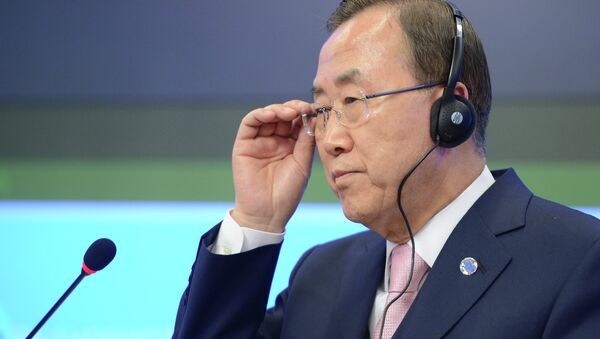 Previewing the upcoming UN General Debate on Tuesday, Secretary General Ban Ki-moon welcomed the ceasefire in Ukraine, but noted that the situation "in and around" the country remains volatile.

UNITED NATIONS, September 16 (RIA Novosti) - Previewing the upcoming UN General Debate on Tuesday, Secretary General Ban Ki-moon welcomed the ceasefire in Ukraine, but noted that the situation "in and around" the country remains volatile.

"I'm encouraged that this ceasefire based on the Minsk protocol is largely holding, even though from time to time we see violence taking place," he said.

Ban said he has been "speaking to President Poroshenko and other leaders, they should continue to have consultations and dialogue, between Ukraine and Russia. There is a lot of support for peace and security and ceasefire from all the actors."

Ban called for "political will from the people of Ukraine so this ceasefire can be sustainable and durable."

Turning to the UN's work, Ban said that the UN from the beginning has been trying to provide humanitarian assistance and human rights monitoring. "I have been doing my own good offices role, even last week I have spoken with President Poroshenko," he said.

"There is no military solution", Ban Ki-moon stated, calling for "political dialogue for a political solution." The UN leader is "urging the leaders in the region to continue such dialogue," he said.

On September 5, the Contact Group on Ukraine, comprising of the representatives of Ukraine, Russia and the Organization for Security and Co-operation in Europe (OSCE), held a meeting in Minsk, which resulted in a ceasefire agreement between Kiev and independence supporters in eastern Ukraine.