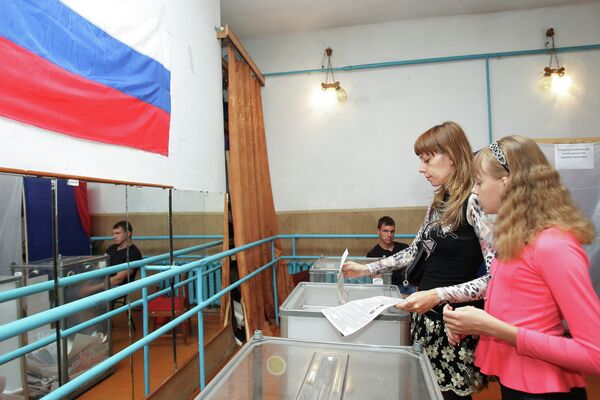 "These were competitive elections, which complied entirely with the Russian and Crimean legislature, there was a high voter turnout, the parties fought actively for the voters, and the voters have made their decision," Leonid Ivlev, deputy head of Russia’s Central Election Commission, told RIA Novosti.

On Sunday, the citizens of the two new Russian regions of Crimea and Sevastopol were electing their parliaments and all the local authorities. The voter turnout stood at 53.61 percent.

"The elections are recognized as valid. The Crimean voters have chosen their parliament for the next five years. It will be this parliament that will pass laws that would facilitate the improvement of Crimea's socio-economic development," he said.

Two Russian parties made it into Crimea's parliament - the United Russia with 70 mandates and the Liberal Democratic Party of Russia (LDPR) with 5 mandates. Crimean Republic’s State Council has 75 seats.

This year's election campaign spread across 84 territorial entities of the Russian Federation on September 14, the all-Russia voting day. A total of 803 candidates and 12 parties had registered for some 6,000 local elections at different levels, including the elections of 30 out of 85 heads of Russian regions and 14 regional parliaments.

Crimea and Sevastopol regions participated in the single voting day for the first time.

Crimea cut ties with Ukraine and reunited with Russia on March 16 as its Russian-speaking population refused to recognize the new coup-imposed authorities in Kiev. The move was preceded by a referendum, in which the reunification with Moscow was backed by over 96 percent of voters.