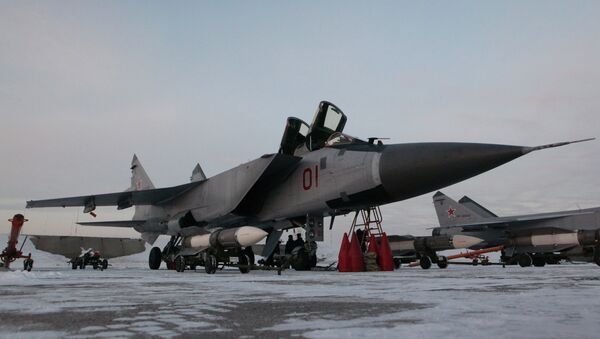 "As part of the drills, flight personnel will practice joint action on air policing, air target interception, ground target engagement and airstrike and anti-aircraft fire evasion. All tasks will be practiced both during the night and day time in various weather conditions," the official said.

The drills are scheduled to last until the end of the week. Kotchetkov added that Mikoyan Mig-31 BM Foxhound interceptors will be carrying out air patrolling missions along the Northern Sea Route, while the Sukhoy Su-24 MR Fencer aircraft will practice reconnaissance and target detection and designation.

In April, Russian President Vladimir Putin ordered the creation of a unified network of naval facilities in Russia's Arctic territories to host advanced warships and submarines as part of a plan to boost protection of the country's interests and borders in the region. In August, Russian Air Force commander-in-chief Viktor Bondarev said that an airbase on Kotelny Island in the Arctic Ocean, which had been out of use for 27 years, will be modernized by the end of 2014. Similar works are being carried out on other Russian islands in the Arctic, where abandoned Soviet military infrastructure is scheduled to be restored by October 2015.