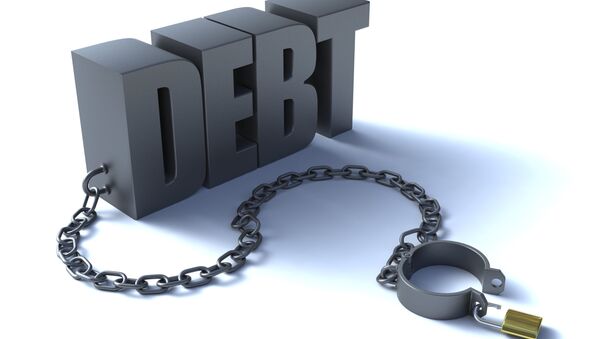 © Flickr / Chris Potter
Subscribe
Western countries, notably the United States, are planning to force Ukraine into debt that it cannot pay and then compel Kiev to clear it by selling oil and gas deposits, as well as agricultural land to Western investors, Michael Hudson, president of the Institute for the Study of Long-term Economic Trends (ISLET), told Radio VR.

MOSCOW, September 15 (RIA Novosti) – Western countries, notably the United States, are planning to force Ukraine into debt that it cannot pay and then compel Kiev to clear it by selling oil and gas deposits, as well as agricultural land to Western investors, Michael Hudson, president of the Institute for the Study of Long-term Economic Trends (ISLET), told Radio VR.

That trend is already visible. “Most of Europe is against gas fracking and yet a lot of the kleptocrats in Ukraine are sending in fracking operations and drilling equipment with the army as they move into the east,” where people have long opposed the controversial technique, the former Wall Street analyst stated. “I don’t think that eastern Ukrainians are any happier to see fracking than the Germans or Americans.”

“Most Americans and Europeans are against genetically modified grains and yet there is a big purchase of farmland and genetically modified crops by Monsanto,” the economist said. The company, which plays a much bigger role in Ukraine than in Europe, has been buying land in the war-torn country for testing.

Hudson also said that what happened to Ukraine is a long-standing US strategy of taking over countries. “You don’t have to invade a country; you can simply buy off its leaders. … You don’t need drones, you don’t need an army, all you need is people willing to take bribes and do what they are told by the US,” the expert said.

Hudson believes that instead of collapsing Ukrainian economy could be in a much better shape. “Ukraine should have been a bridge like Finland or like Austria was after WWII. It could have been a buffer zone between Europe and Russia and profited from that very much. But instead foreign political operatives mainly from the US … corrupted the whole country,” the economist pointed out.

Ukraine could become a bridge and profit from that unique position if it admits that there is a lot of corruption that is sponsored by the United States, takes back what the kleptocrats have stolen and gets rid of the US influence. “Ukraine should do what is best for [its people], not for Washington and its cold warriors,” the economist stressed.

Ukraine is currently on the brink of default, with its authorities seeking international loans. In May, the IMF approved a $17 billion loan to Ukraine in the form of a two-year stabilization program.