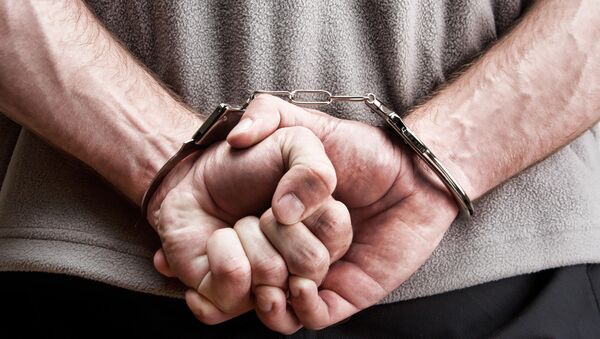 © Fotolia / Nomad_Soul
Subscribe
The Supreme Court of North Korea sentenced another US citizen, Matthew Todd Miller, for committing espionage, thus increasing the number of Americans held against their will in the country to three.

MOSCOW, September 15 (RIA Novosti) – The Supreme Court of North Korea sentenced another US citizen, Matthew Todd Miller, for committing espionage, thus increasing the number of Americans held against their will in the country to three.

Miller was sentenced to six years of hard labor for illegally entering the country and spying. The ruling came with no possibility of appeal. The charge for espionage came under Article 64 of the country"s Criminal Code, according to which the delinquent could receive a sentence of five to 10 years.

The court said in a Sunday trial that Miller tore up his visa in Pyongyang Airport on April 10 and expressed his ambition to experience prison life to investigate the human rights situation in the country.

The other two US citizens held in North Korea are Kenneth Bae and Jeffrey Edward Fowle. The charges against the two are propaganda and espionage-related.

AWAITING TRIAL FOR A BIBLE

Fowle was arrested in May when he was touring the country as a part of his vacation. Fowle took on his trip a Bible, which was the main cause of his arrest. He was accused of leaving it in a provincial nightclub in the city of Chongjin, which is a crime in North Korea as religious proselytizing is prohibited.

"American citizen Jeffrey Edward Fowle entered the DPRK as a tourist on April 29 and acted in violation of the DPRK law, contrary to the purpose of tourism during his stay. A relevant organ of the DPRK detained him and is investigating him," Korean Central News Agency reported the same month Fowle was detained.

Fowle has not been trialed and he is yet to learn the sentence for his case.

15 YEARS OF IMPRISONMENT FOR A CHRISTIAN MISSIONARY

Bae, a Korean-American Evangelical Christian missionary, owned a tourism company "Nations Tour," specializing in Christian missionary trips. His business went wrong in December 2012, when he was detained in North Korea for committing hostile acts against the country.

Bae was accused of planning a religious insurrection, named "Operation Jericho," aimed at overthrowing the North Korean government and preaching against it in American and South Korean churches and of setting up special bases in bordering China for his anti-governmental causes.

All these crimes resulted in a 15-year sentence of hard labor for the Christian missionary in April 2013. The United States called for the release of Bae on humanitarian grounds the day he was sentenced. However, Bae is still serving his 15-year term, despite serious health problems, such as diabetes, fatty liver disease and increasing blindness.

All three Americans participated in an exclusive CNN interview early September where they admitted to committing crimes against North Korea and publicly apologized, but it is unclear whether confessions were made freely or under coercion by North Korean authorities. The men called on Washington to secure their release.

The United States has responded by repeatedly sending its North Korean human rights envoy Robert King to seek pardon for them, though without success.

US State Department warns its citizens of arbitrary arrest and detention in North Korea as nine Americans had been detained in the country since 1996 and three of them, mentioned above, are still in detention.