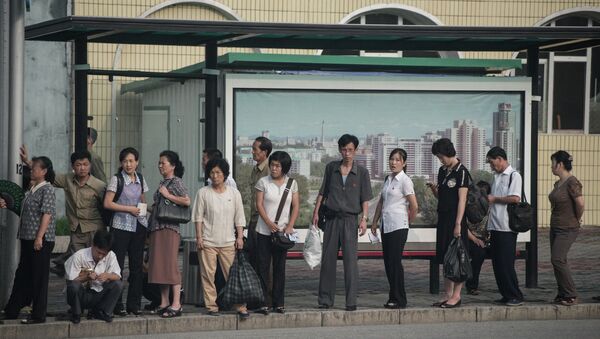 North Korea has published a report that claims the country’s citizens “enjoy genuine human rights” in a bid to counter allegations of widespread abuses and crimes against humanity made among others by the UN, the North’s news agency KCNA reports.

MOSCOW, September 14 (RIA Novosti) — North Korea has published a report that claims the country’s citizens “enjoy genuine human rights” in a bid to counter allegations of widespread abuses and crimes against humanity made among others by the UN, the North’s news agency KCNA reports.

The “comprehensive and detailed” document that exceeds 50,000 words in its English translation was produced by the country’s Association for Human Rights Studies in cooperation with governmental agencies, nongovernmental organizations, academic institutions, experts in the field and citizens of the DPRK with the aim of detailing the country’s human rights policy and recounting the “actual human rights performance,” the spokesman for the Association said.

North Koreans “enjoy genuine human rights” that are “absolute”; respecting and promoting them is the country’s top priority, he assured.

The report divided into five chapters gives a historical account of the human rights situation in North Korea, explains DPRK position on the issue, details political, civil and social-economic rights that the citizens allegedly enjoy, says what difficulties the authorities encounter and offers prospects on the protection and promotion of human rights in the country.

The report also condemns those foreign countries and organizations, referring to them as “hostile forces” that “are spreading their values and grossly distorted human rights views, while violating the sovereignty of other countries and infringing upon their human rights.” North Korean authorities have long accused Western countries, notably the US, of using human rights issue to destabilize if not overthrow the current political system.

In February, the UN Commission of Inquiry on Human Rights in the DPRK published a 372-page report following a year-long inquiry. It accused the regime of crimes against humanity including “extermination, murder, enslavement, torture, imprisonment, rape, forced abortions and other sexual violence, persecution on political, religious, racial and gender grounds, the forcible transfer of populations, the enforced disappearance of persons and the inhumane act of knowingly causing prolonged starvation.”

Human Rights Watch has called on the US to condemn crimes against humanity committed in North Korea in the strongest terms and has thrown its support behind imposing targeted sanctions against those most responsible for the human rights violations in a joint letter to the US State Secretary John Kerry. For its part, Amnesty International urged North Korean authorities to support its claims with real action and take steps to improve the human rights situation by giving the accused a fair trial, address the issue of enforced disappearances, etc. in a statement issued in mid-June.

World leaders are expected to discuss the human rights situation in North Korea on the sidelines of the general debate that will take place during the 69th session of the UN General Assembly, slated to open September 16.