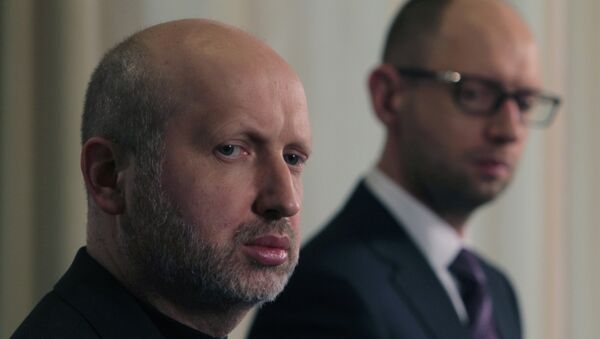 "We were supposed to go to the [Parliamentary] election together with [Petro] Poroshenko's party, but Poroshenko's party is not satisfied with this; we will go in different camps," Ukrainian prime minister said.

"If the government and the president do not live up to the Ukrainians' expectations, there will be a new government, a new president," Yatsenyuk underscored, adding that there are certain obstacles for the two political parties to unite.

Earlier this week, Ukrainian media reported that Prime Minister Yatsenyuk would top the party list of the Petro Poroshenko Bloc.

Wednesday, Ukrainian Prime Minister Arseniy Yatsenyuk and Parliament Speaker Oleksandr Turchynov were elected as the heads of the newly-created Popular Front party. Earlier, the politicians left Batkivshchyna party, reportedly over the disagreements with the party's leader Yulia Timoshenko. Yatsenyuk was appointed as head of the party's political council and Turchynov will run its headquarters. The country's Interior Minister Arsen Avakov, Justice Minister Pavlo Petrenko and a number of other high-profile Ukrainian officials have also joined the Popular Front.