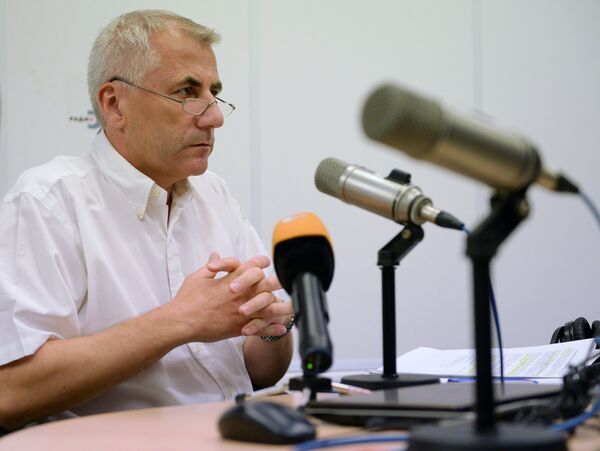 The European Commission showed a great deal of flexibility in its free trade zone talks with Ukraine and a constructive approach toward Russia, the head of the EU Delegation to Russia told RIA Novosti Saturday.

MOSCOW, September 13 (RIA Novosti) - The European Commission showed a great deal of flexibility in its free trade zone talks with Ukraine and a constructive approach toward Russia, the head of the EU Delegation to Russia told RIA Novosti Saturday.

"The European Commission demonstrated flexibility, an approach that was beneficial to Ukraine and a constructive attitude to Russia while discussing Russia's fears that deal with the implementation of EU-Ukraine Deep And Comprehensive Free Trade Area Agreement," Vygaudas Usackas said in a comment on the trilateral negotiations between Moscow, Kiev and Brussels.

Russia's Economic Development Minister Alexei Ulyukayev said on Friday that Russia, Ukraine and the European Union had reached a crucial compromise on Kiev's free trade pact with the EU postponing its entry into force until the end of 2015.

"EU's eagerness to be flexible should be regarded as an integral part of the comprehensive peace process in Ukraine that also requires Russia's respect toward Ukraine's right to decide its future and toward its territorial integrity," the head of the EU mission in Moscow added.

Vygaudas Usackas vowed that Ukraine would keep its priority access to the European market. Kiev is also expected to ratify the Association Agreement with the EU, whereas the European Parliament and all EU member states are to endorse the accords agreed on September 12.

"The agreement that was reached in Brussels on Friday signifies that the Ukrainian side is still eligible for a priority access to the EU market. It is a clear sign on the part of the EU that our political partners are also our trade partners," he said.

Usackas added that Brussels expected Russia not to retaliate against Ukraine and continue to give Kiev a preferential access to the free trade zone within the post-Soviet Commonwealth of Independent States (CIS).

The Ukraine-EU Association Agreement is a treaty between the two, which presupposes political and economic association between the parties.

Moscow previously expressed deep concern over Ukraine's signing of the free trade agreement with the EU, as it could trigger an uncontrolled flow of duty-free goods, and warned Kiev that Russia would be forced to protect its market.