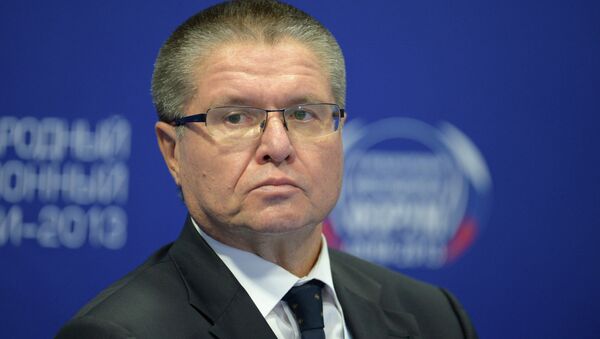 “We will support our sanctions-hit companies by all means,” Ulyukayev said following the second round of trilateral ministerial talks on Ukraine-EU association agreement.

“These support measures could include a preferred customs regime, direct budget allocations, the use of funds from the Pension Fund or the National Prosperity Fund,” the minister said.

The European Union and the United States on Friday ratcheted up sanctions on Moscow over its alleged support for rebels in eastern Ukraine and a conflict that has claimed more than 2,600 lives since April.

The United States Department of Treasury confirmed on Friday that it was expanding sanctions against Russian companies, and increasing the number of sanctioned Russian entities in the financial, energy and defense sectors.

This newest round of sanctions prohibits offering financing to Rostec, which deals in industrial technology products. It also adds Russia's largest bank, Sberbank, to the list of sanctioned financial institutions.

Debt financing restrictions have been tightened from 90 days to 30 days for the other sanctioned banks: Bank of Moscow, Gazprombank, Russian Agricultural Bank, VEB, and VTB Bank.

The introduced sanctions prohibit the exportation of goods, services (not including financial services), or technology in support of exploration or production for Russian deepwater, Arctic offshore, or shale projects that have the potential to produce oil, to five Russian energy companies – Gazprom, Gazprom Neft, Lukoil, Surgutneftegas, and Rosneft.

The Treasury Department is also restricting financing to Gazprom Neft.

On Friday morning, new European Union sanctions against Moscow over its alleged role in the Ukrainian crisis came into force.

The measures also include a ban on the sale of dual-technology equipment to nine Russian defense companies, including the Kalashnikov Concern and Almaz-Antey.

Earlier today, Russian President Vladimir Putin said that using sanctions as an instrument of foreign policy is not effective and never yields any results, warning that sanctions cause certain damage to those using this measure.