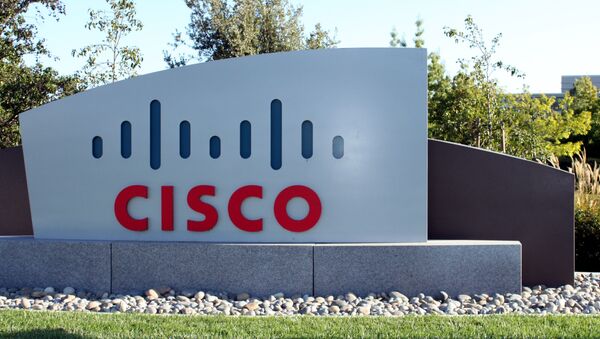 © Flickr / Prayitno
Subscribe
During the previous fiscal year, ending on the 26th of July, the turnover of the equipment and software giant Cisco has dropped by 24 percent, according to the annual report presented to the United States Securities and Exchange Commission.

MOSCOW, September 12 (RIA Novosti) - During the previous fiscal year, ending on the 26th of July, the turnover of the equipment and software giant Cisco has dropped by 24 percent, according to the annual report presented to the United States Securities and Exchange Commission. This is the company’s lowest figure in any country of the EMEA.

The local decline in sales proves 2 percent without the Russian market and 4 percent with it. Meanwhile, Cisco sales missed estimates by 11 percent in Brazil, Russia, India, China and Mexico (BRICM).

While the Cisco report lacks absolute data on its sales in Russia, it reveals that equipment sales in EMEA reached $9,7 bln. The previous fiscal year showed sales descend by $394 mln. Including service sales figures, the total revenue of Cisco dwindled by 1,7 percent and constituted $12 bln.

Reportedly, the previous fiscal year in Russia and some CIS countries was marked by an investigation regarding a possible violation of American Foreign Corrupt Practices Act. However, the company insists it barely had a negative effect on its business, as the above mentioned states comprise less than 2 percent of the corporation’s overall revenue.

But back in August, the multinational company attributed the order decrease to the worsening of the geopolitical crisis in Ukrainian and resulting poor Russian-American relations.

It is noteworthy that the company’s reputation was undermined in 2014 by the US NSA, whose officers planted bugs into Cisco devices for export. This was disclosed by NSA former employee Edward Snowden. This prompted Cisco CIA John Chambers to address Barack Obama with an open letter asking the President to put a tighter rein on intelligence services.

Currently Cisco maintains at least 60 percent of the Russian telecommunication network market,with up to 80 percent of business coming from the state sector. Despite that, Russian officials have been outspoken advocates of replacing American networking equipment with domestic products.  In their opinion, it would shield Russia from espionage and help sustain sovereignty. At the same time the share of Cisco in Russia has also shrank due to Chinese Huawei’s aggressive marketing and growing Russian-Chinese partnership.