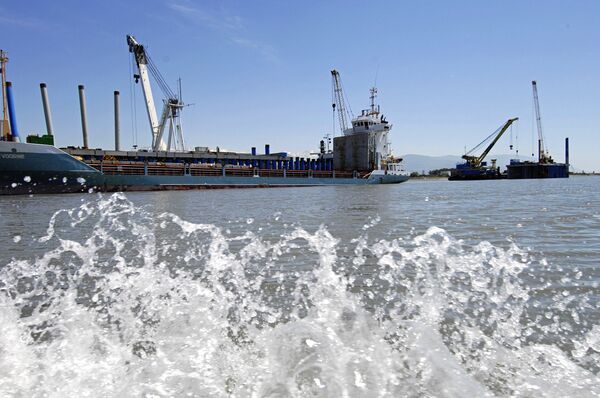 © RIA Novosti . Mikhail Mordasov
/
Go to the photo bank
Subscribe
The People's Republic of China (PRC) and the Russian Federation will build a seaport that is supposed to become one of the largest seaports in north-eastern Asia, AFP reported Thursday.

MOSCOW, September 11 (RIA Novosti) - The People's Republic of China (PRC) and the Russian Federation will build a seaport that is supposed to become one of the largest seaports in north-eastern Asia, AFP reported Thursday.

According to the report issued Wednesday by People's Daily Online, the new seaport will be able to handle about 60 million tons of cargo per year.

The new seaport will be situated on the Russian coast of the Sea of Japan, 18 kilometers (11 miles) away from the Chinese border.

The deal was reportedly signed during the Conference on Interaction and Confidence Building Measures in Asia (CICA) in Shanghai held in May, AFP reports.

The construction of the new seaport is one of the steps recently taken by the two countries aimed at establishing strategic energy cooperation. In October, Russian President Vladimir Putin and Chinese President Xi Jinping are scheduled to attend the China-Russia Energy Cooperation Committee's summit, as reported by the BRICS Post.

China wants to diversify its energy sources, while Russia is trying to refocus its gas and oil exports towards Asia.

On May 21, Russia and China agreed on a long-term gas supply contract in Shanghai, after years of talks on the deal, worth billions of dollars. Russia's gas major Gazprom and the China National Petroleum Corporation (CNPC) signed a contract of purchase and sale of natural gas deliveries through the eastern route.