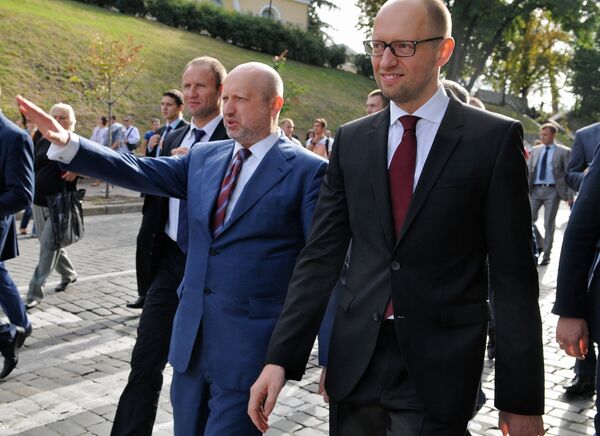 The first party congress voted to appoint Yatsenyuk as head of the party’s political council, while Turchynov will head its main headquarters.

On July 24, Yatsenyuk announced his resignation as the prime minister, however, the Verkhovna Rada the Ukrainian parliament – declined his resignation, with only 16 lawmakers submitting votes of no confidence, while 109 voted against accepting the resignation.

On the same day, Turchynov officially declared the end of the coalition which had been formed after the change of power in February, and consisted of deputies from such parties as Batkivshchina, UDAR, Svoboda and several groups of parliamentarians that joined them.

The reports suggested that Yatsenyuk and Turchynov left the Batkivshchina party over the disagreements with the party leader Yulia Timoshenko.

According to Turchynov, the Popular Front party is to have another session in several days in order to adopt the party’s program and decide upon the participation in the parliamentary elections on October 26.