Catalonia to Follow in Scotland’s Footsteps on Way to Independence 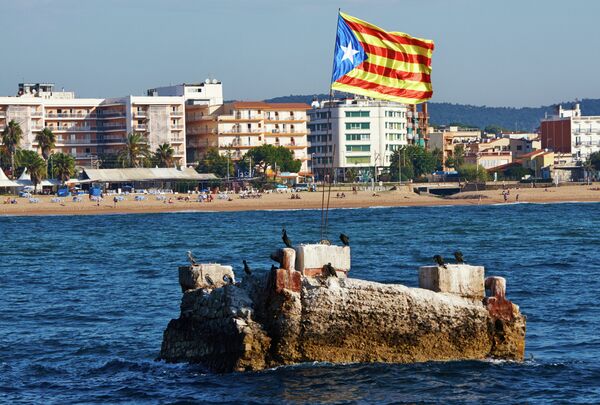 Should Scotland vote for independence, it could trigger an independence campaign in Catalonia, as this issue is extremely important for the region, Catalan President Artur Mas was quoted as saying by Financial Times.

MOSCOW, September 10 (RIA Novosti) - Should Scotland vote for independence, it could trigger an independence campaign in Catalonia, as this issue is extremely important for the region, Catalan President Artur Mas was quoted as saying by Financial Times.

“The first [factor] will be the reaction of European leaders. I am sure they will accept the result of the Scottish referendum. The second is that negotiations will start very quickly between Edinburgh, London and Brussels to keep Scotland within the EU. Both things are very important for Catalonia,” said Mas.

The Spanish region of Catalonia has been expecting the Scottish referendum to create a precedent for its own struggle for independence from Madrid. The Spanish government has followed the UK's lead and allowed a popular vote on the region’s status set for November 9.

However, unlike the British government, Spanish Prime Minister Mariano Rajoy and the Constitutional Court of Spain are said to have ruled out an independence referendum in Catalonia considering it illegal.

“There is no reaction in Madrid apart from saying ‘no’ to everything,” the Catalan leader said.

Speaking of the economic consequences of independence, Mas expressed confidence that everyone would be able to accommodate to the new situation. The issue is especially important given that Catalonia still shares a part of the Spanish debt and assets.

Mas expressed his determination to go ahead with the referendum, irrespective of what the Spanish government may do to hinder it. Should Spanish authorities attempt to hamper the referendum, “we will call new elections, by 2016 at the latest, and this election will become the referendum on independence,” Mas was cited as saying by BBC.

“You cannot convince the Catalan people that they have no right to vote on this. You cannot stop a democratic and peaceful movement like this," he added.

Catalonia has a population of about 7.5 million people, and accounts for a quarter of Spanish taxes, according to BBC. The level of support for independence in Catalonia has been static in recent years at more than 50 percent, which is significantly greater than 30 percent support in Scotland that contributes only about eight percent of UK’s taxes.

A referendum on whether Scotland should be an independent state is to take place on September 18.