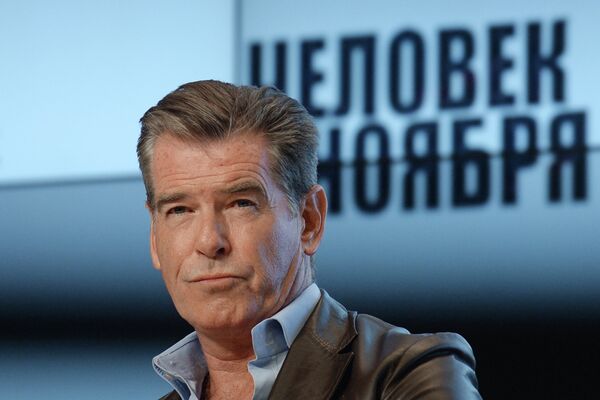 "We wrote this story three years ago. So it’s just the confluence of time that we have this movie coming out, and the issues of politics and what’s happening in the Ukraine, and this movie. It was not our intention. It’s just the way it is. It is deeply heartfelt moment in history for you all here and for people back in America well to see what’s going on, and I would hope for peace. I would hope that things would get resolved,” the actor said upon arriving to Russia to promote "The November Man".

"The November Man" directed by Roger Donaldson is about an ex-CIA agent played by Brosnan who returns to the service, to ex-filtrate a woman employed by a Russian politician and mobster in Moscow. During the mission, Brosnan’s character is chased by gangs of Russians and Americans. The film is adapted from the Bill Granger 1987 novel, “There are No Spies,” and is produced by Brosnan’s production company, Irish Dream Time.

According to the actor, “The November Man is a fall back to a different style of filmmaking… the action is all on the street, it’s all in camera, and we wanted something that was muscular.”

The film also stars Olga Kurylenko who played in "Quantum of Solace,” “Oblivion,” and "Vampire Academy," along with Luke Bracey who acted in "The Best of Me,” and "Monte Carlo.” “The November Man” will be released in cinemas in Russia on September 18.

Pierce Brosnan is an Irish actor and producer who is famous for his role as British secret agent, James Bond in four "007" films.