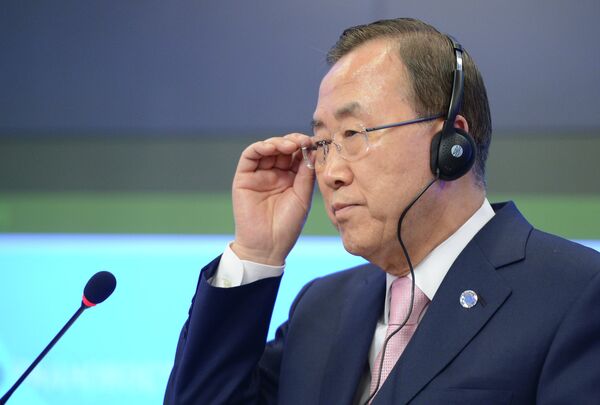 “We have seen these reports, and we have taken them into account,” Durarric said.

Dujarric also stated that the memory of these horrible events will push international community to double its efforts to stabilize the situation in eastern Ukraine.

He also mentioned that Ban Ki-moon is waiting for the final investigation report, which is due next summer.

The Dutch Safety Board released the preliminary report on the MH17 crash earlier today. According to the report, the Malaysia Airlines flight broke up in the air probably as the result of structural damage caused by a large number of high-energy objects that penetrated the aircraft from outside.

However, many experts found the information from the report inconclusive.

The Dutch Safety Board stated that from now on, the investigation team will be working towards producing its final report.

On July 17, a Malaysia Airlines flight from Amsterdam to Kuala Lumpur crashed in Ukraine’s eastern region of Donetsk. None of the 298 people on board survived the crash.

The reason for the crash is still a matter of debate, as Ukrainian authorities claim the independence supporters of the eastern regions shot down the plane, but the latter say they do not possess the means to hit a target flying at such height.