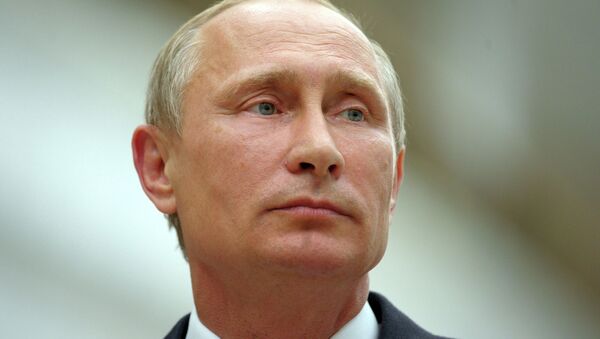 © RIA Novosti . Alexei Druzhinin
/
Go to the photo bank
Subscribe
Russian President Vladimir Putin will hold a meeting on Wednesday with members of the government on the implementation of the tasks set in the address to the Federal Assembly in regards to the so-called "May Decrees."

MOSCOW, September 10 (RIA Novosti) - Russian President Vladimir Putin will hold a meeting on Wednesday with members of the government on the implementation of the tasks set in the address to the Federal Assembly in regards to the so-called "May Decrees."

"The participants of the meeting will discuss, in particular, the development of the draft federal budget for 2015 and the planning period of 2016 and 2017, as well as a number of pressing current issues," the press service of the Kremlin reported.

On his first day as president in 2012, Putin passed a slew of presidential decrees that are commonly referred to as the May Decrees, which set long-range targets for the Russian economy.

The May Decrees largely summarized Putin’s manifesto released during the election campaign, including long-term reforms in the defense industry, the army, education, housing, healthcare, science and demography.

The decrees were billed as the top priority for the Putin administration and the newly-formed Cabinet, whose efficiency was often measured by how well it managed to live up to Putin’s commitments.

In August, Russian Prime Minister Dmitry Medvedev said that the budget for 2015 must consider the effect of the sanctions and be as realistic as possible. Medvedev also stressed that the budget priorities will remain unchanged - social obligations, defense, and security, including in the economy.

In addition, the prime minister pointed out that the federal budget for the next year should provide for an increase in state support of agriculture in general and in the insurance of farmers in particular. On August 8, Russia has issued a one-year limitation for the imports of certain food and agricultural products from countries that had imposed sanctions against Moscow, namely the United States, the EU member states, Canada, Australia and Norway.