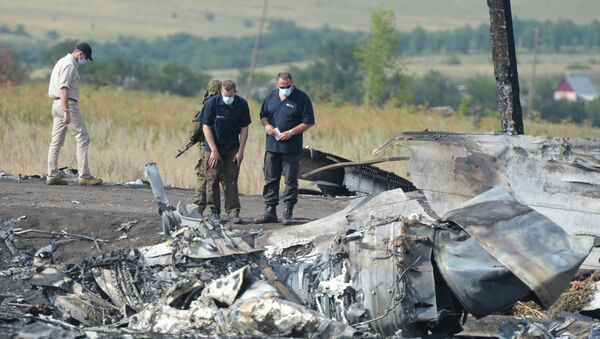 A preliminary report issued by the Dutch Safety Board on the MH17 crash tells absolutely nothing, and just leaves the unanswered questions open for another year, Frederick William Engdahl, an American German freelance journalist told RIA Novosti on Tuesday.

"The report tells us absolutely nothing, as there is no data, that would indicate anything to anybody," Engdahl said.

"It seems it was released just to tell us that the real report will be released in one year from now. It is worthless and silly that they even went through this big drama to bring it out at this point. It is worth nothing to any party in the dispute, nor to the families of the people that were in the plane," he added.

Engdahl emphasized that the observers of the Dutch Safety board were blocked from going to the site of the wreckage because of continuous shelling in the area, which the Kiev government could not stop.

“They couldn’t go near. However, had the Kiev government been genuinely interested in a truthful analysis, they would have called a ceasefire and allowed the investigators to go in,” he said.

“They have released no forensic evidence that indicates that it was done by either Russia or by the independence supporters in Eastern Ukraine,” he asserted.

“The idea that the EU and the US impose sanctions against Russia based on the charge by the US without the evidence that they have shot down the MH17 is absurd and the extreme, just like the new sanctions of the EU pressured by Washington to adopt them just in case the ceasefire, actually proposed by Putin, doesn’t work,” Engdahl added.

Engdahl also stated that further transparent and independent investigation needs to be carried out in order to determine real causes of the catastrophe.

“I think the essential forensic evidence needs to be taken out of the hands of bias parties, and genuine independent experts committee should be called on to examine the full evidence, including the onsite wreckage and everything around that. Besides, all of the information that air traffic control inside Ukraine has on the particular airline has to be released. And until that is done I think there is nothing to be set,” Engdahl concluded.

The Dutch Safety Board released the preliminary report on the MH17 crash earlier today. According to the report, the flight operated by Malaysia Airlines broke up in the air probably as the result of structural damage caused by a large number of high-energy objects that penetrated the aircraft from outside.

“It’s likely that this damage resulted in a loss of structural integrity of the aircraft, leading to an in-flight break up,” experts said. “There are no indications that the MH17 crash was caused by a technical fault or by actions of the crew.”

The investigation was conducted according to the standards of the International Civil Aviation Organization (ICAO), a specialized agency of the United Nations. The only objective of this investigation is the prevention of similar accidents and incidents, the report says.

The reason for the crash is still a matter of debate. According to Ukrainian authorities, the plane was shot down by independence supporters, while the latter deny the allegations, saying they do not have the means to hit a target flying so high.