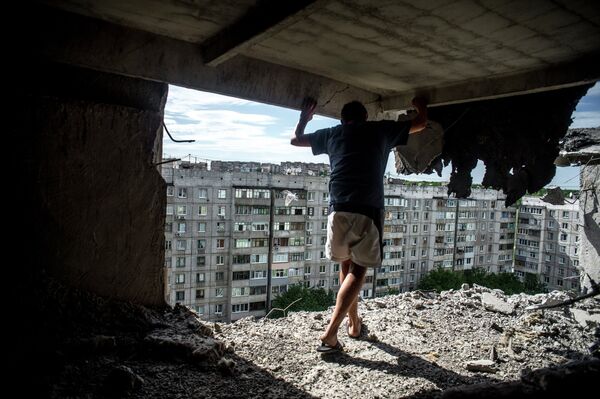 It will be difficult to achieve a permanent truce in Ukraine, despite the ceasefire agreement reached during the September 5 meeting in Minsk, Gerhard Mangott, professor of political science at the University of Innsbruck, told RIA Novosti Monday.

MOSCOW, September 8 (RIA Novosti) – It will be difficult to achieve a permanent truce in Ukraine, despite the ceasefire agreement reached during the September 5 meeting in Minsk, Gerhard Mangott, professor of political science at the University of Innsbruck, told RIA Novosti Monday.

“It’s good that the ceasefire agreement has been signed, but it’s very difficult to get to the peace agreement,” Mangott said.

The expert stressed that the agreement signed at the meeting of the Contact Group on Ukraine has several articles that are hard to achieve, particularly one that calls for the disarmament of all “illegal arms formations” in the country.

“Both sides have a different understanding of what an ‘illegal arms formation’ is,” Mangott said, noting that while Kiev considers the militia in southeastern Ukraine as “illegal”, the independence fighters “see themselves as the military forces of the independent republics which have had referendums on their independence from Ukrainian statehood.”

Apart from the differing stances of the Ukrainian leadership and the militia, there is also disaccord within the Kiev government itself, Mangott explained, saying that Ukrainian President Petro Poroshenko decided to sign a ceasefire with independence fighters only when it became clear that Kiev forces would not win the military confrontation in the southeast of the country.

“The developments of these past three weeks have shown to President Poroshenko that there is no military victory for the Ukrainian side, they simply cannot win this confrontation with the rebels and this actually triggered the readiness of the Ukrainian leadership to sign the ceasefire agreement,” Mangott said, noting that Ukrainian Prime Minister Arseniy Yatsenyuk, being “the US man” in the Kiev government, had always been opposed to signing a ceasefire with independence fighters.

“There is no consensus between the Ukrainian elite, political elite, about the future course. And if the ceasefire is not going to hold that is of course a very strong weakening for the position of Poroshenko. But also if the ceasefire holds and there is no progress on resolving the political issues, then of course this will bring Poroshenko to great trouble because the nationalist forces within the Ukrainian elite will start criticizing him,” Mangott said.

The conflict in eastern Ukraine started when Kiev launched a military operation against independence supporters who refused to recognize the country’s new government which came to power as a result of the February 22 coup.

According to the latest estimates from the UN Human Rights Commission, at least 3,000 have died in Ukraine since mid-April when Kiev’s military operation started.

Gerhard Mangott noted that from a humanitarian perspective, the ceasefire agreement is a positive achievement.

“For now of course it’s the best that the weapons are silent, that we don’t have that confrontation anymore,” Mangott said.