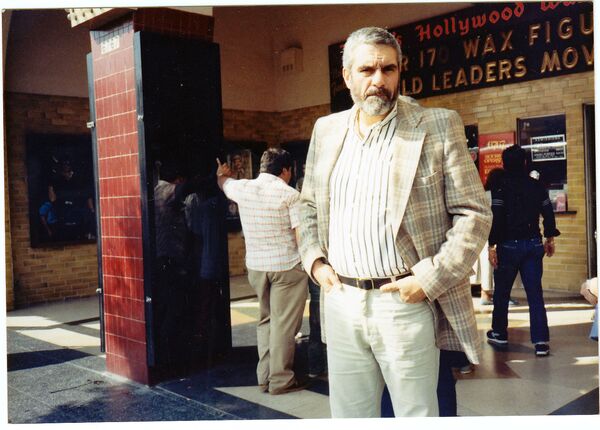 The well-known writer and journalist Sergei D. Dovlatov (official name Mechik) was born into a family of theatrical workers in Ufa on September 3, 1941.

He moved to Leningrad in 1944. In 1959, he joined the philological department of Leningrad University (majoring in Finnish), but was expelled before he could complete his second year.

Between 1962 and 1965, he did a tour of duty with the Internal Troops of the Ministry of the Interior, guarding correctional labor camps in northern Komi Autonomous Soviet Socialist Republic.

After his discharge, he enrolled in the department of journalism. Simultaneously he was employed as a correspondent by the Za Kadry Verfyam newspaper published by the Leningrad Shipbuilding Institute. For a short period, he worked for author Vera Panova as her personal secretary. At this time, he started writing short stories. He was a member of the Gorozhane group of writers in Leningrad.

Dovlatov’s repeated attempts to have his works published by Soviet magazines were invariably a failure. The typeset matter for his first book was destroyed on orders from the KGB. Since the late 1960s, he regularly contributed to the dissident underground press (samizdat).

Between 1972 and 1976, he lived in Tallinn, Estonia, working for Russian-language newspapers Sovetskaya Estonia and Vecherny Tallinn. He was also a guide at the Pushkin Museum-Reserve near Pskov (Mikhailovskoye). In 1976, he returned to Leningrad to work for the Kostyor magazine and write book reviews for both Neva and Zvezda magazines.

In 1976, some of his short stories were published in the West by Kontinent and Vremya i My, for which Dovlatov was expelled from the USSR Union of Journalists.

In 1978, he immigrated to Vienna, Austria, moving later to the United States, where he was among the founders of Novy Amerikanets (The New American), America’s only Jewish-Russian weekly. (He was its editor-in-chief from 1980 to 1982.)

In the mid-1980s, he finally achieved recognition as a writer, being printed in the prestigious magazine The New Yorker. (He was reputed as the second most popular Russian writer after Vladimir Nabokov.)

He published 12 books during his 12 years in emigration, which came out in the US and Europe. In the USSR, he was known as a samizdat writer and a Radio Liberty broadcaster.

Sergei Dovlatov died of a heart disease in New York on August 24, 1990, and was buried in Mount Hebron Cemetery.

Five days after his death, The Reserve, his first important work to be published in his homeland, passed for press in the USSR. Since the early 1990s, his books have been widely published in Russia.

His writings have been translated into several foreign languages, including Japanese.

In 1994, “The New American,” a play based on The Zone, The Reserve and his American short stories (directed by Pyotr Shteyn), premiered at the Moscow Art Theater.

In 2001, Moscow’s Zakharov Publishers printed Dovlatov’s correspondence with Igor Yefimov. His widow sued over an alleged violation of heirs’ rights, and a Moscow court ruled in her favor on November 5, 2002.

In 2006, the Sergei Dovlatov International Fund, jointly with Makhaon Publishers, published the book Sergei Dovlatov. Speech Without Cause… or Editorial Columns. Unpublished Materials, which includes what he wrote for The New American weekly.

In 2009, Amphora Publishers printed a biography of Dovlatov (Dovlatov) by Anna Kovalova and Lev Lourie. The book is based on reminiscences by his childhood friends, fellow students and fellow journalists, as well as interviews with his relatives and friends in St. Petersburg, Tallinn and the United States.

Sergei Dovlatov was married twice and is survived by daughter Maria by his first wife, Asya Pekurovskaya, and by daughter Yekaterina and son Nikolai by his second wife, Yelena Dovlatova.