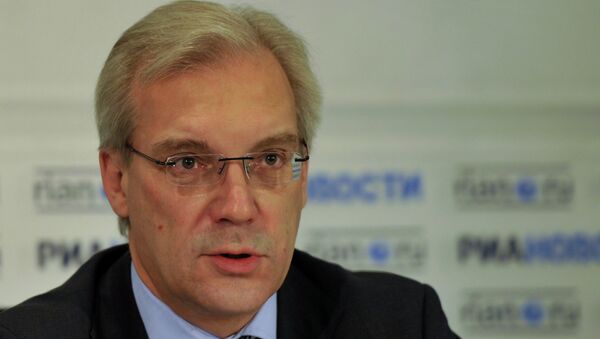 © Sputnik / Alexander Vilf
/
Go to the photo bank
Subscribe
NATO used the military crisis in Ukraine as a pretext to boost its military presence near the Russian borders, Russia’s envoy to the alliance, Alexander Grushko, said Friday.

MOSCOW, September 5 (RIA Novosti) – NATO used the military crisis in Ukraine as a pretext to boost its military presence near the Russian borders, Russia’s envoy to the alliance, Alexander Grushko, said Friday.

“The Ukrainian crisis was used not only to strengthen ties between NATO and Ukraine, but also to grow NATO military muscles near Russian borders,” Grushko said. “Measures are already being taken to ensure permanent NATO military presence in the Baltic and Black seas.”

“In general, I would like to say that throughout the crisis in Ukraine NATO has played an extremely destructive role,” the Russian diplomat said, adding that the country’s actions “contradict the very logic of the political process currently under way in Minsk.”

The NATO military exercises scheduled to take place in Ukraine later this month are a “pure provocation” intended to encourage Kiev to use force in the southeast, Grushko added.

“This is pure provocation. Another encouragement, another signal to the Kiev government to avoid compromises and choose the military option. It’s a very dangerous game,” he said.

“The problem with NATO is that when it pumps its infrastructure up or when it pumps up its muscles, the alliance does not think about the European security,” Grushko added.

Decisions made by the alliance during this week’s summit in Wales violate the 1997 Russia-NATO Founding Act, the Russian diplomat said.

Earlier on Friday, NATO member states agreed to expand the alliance’s command and logistics infrastructure in Eastern Europe and form a new force of several thousand troops ready to mobilize quickly in case an alliance country comes under attack. NATO said the reason for the new unit is a security environment, including “Russia’s aggression against Ukraine.”

The new rapid reaction force will include "several thousand land troops ready to deploy within a few days with air, sea and Special Forces support,” NATO Secretary General Anders Fogh Rasmussen said on the sidelines of the NATO summit in Wales.

The Baltic States and Romania have already offered to host the forces, whose exact numbers have not been agreed.

The NATO-Russia Founding Act on Mutual Relations, Cooperation and Security signed in 1997 still remains in force, Rasmussen said but accused Moscow of violating its principles.

The NATO-Russia Founding Act is the fundamental document in the relations between the Russian Federation and the alliance. It states, more specifically, the principle of non-use of military force in foreign policy, as well as a joint declaration that Russia and NATO do not see each other as adversaries.

Russia has repeatedly expressed concern over the increasing NATO military presence close to its borders.