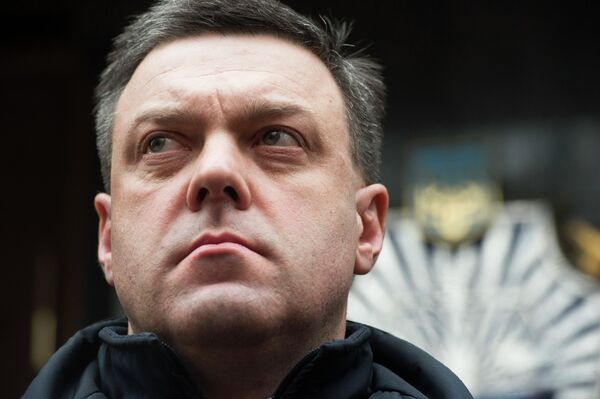 Ukrainian parliament members have drafted an appeal to the country’s president Petro Poroshenko to impose martial law in the Donetsk and Luhansk regions, subject to military operation against independence supporters, the leader of the nationalist Svoboda party Oleg Tyahnybok told the press Thursday.

“The sentiment of roughly all the parliament members is to introduce martial law in Ukraine. Today, we, along with members of other factions, prepared a draft resolution, which I hope will be put to vote as early as the next plenary week,” the politician said.

He also said that the Svoboda faction will no longer support any executive sessions of parliament.

“Today, it was a waste of time. We have not heard anything new either from parliament members, or from security agencies chiefs,” Tyahnybok added.

Tyahnybok also claimed members of parlaiment were poorly informed about the situation in the Donetsk Region, where he said the Ukrainian military, surrounded by the pro-independent forces, have incurred serious casualties.

On Thursday, Ukraine’s parliament, the Verkhovna Rada, held a closed session on the situation in the country’s south-east, bringing together heads of the security agencies, and ministers with Prime Minister Arseny Yatsenyuk. Earlier, member of parliament Anatoly Hrytsenko claimed the introducing a martial law would not be considered since the President has not filed such proposal.

The Ukrainian authorities have launched a military operation to suppress the pro-independence movement of the country’s south-east, which has killed around 2,500 people, according to the UN. Late August, Russian president Vladimir Putin and his Ukrainian counterpart Petro Poroshenko agreed on the need for dialogue in order to bring the country to peace. Earlier this week, the representatives of the Ukrainian government and the self-proclaimed Donetsk and Luhansk people’s republics met in Belarus, sharing their views on ways to put an end to the crisis.