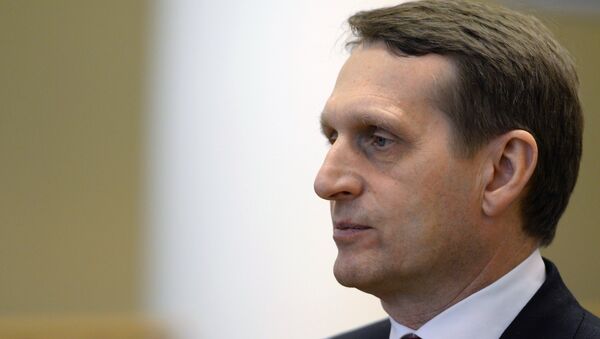 The speaker of Russia's lower house of parliament said Thursday that if Kiev protects the killer of Rossiya Segodnya photojournalist Andrei Stenin, it would be considered as complicity in the crime.

MOSCOW, September 4 (RIA Novosti) - The speaker of Russia's lower house of parliament said Thursday that if Kiev protects the killer of Rossiya Segodnya photojournalist Andrei Stenin, it would be considered as complicity in the crime.

“We demand that the Kiev authorities carry out a thorough investigation into Andrei Stenin’s death and if the authorities protect the killer, we will consider it as complicity in the crime,” Sergei Naryshkin told reporters.

The house speaker expressed his condolences over Stenin’s death.

”Yesterday, it was reported about the death of Russian journalist Andrei Stenin. I express my heartfelt condolences to the family, friends and colleagues of the deceased journalist. Until yesterday we had been hoping for the best but today we are mourning, mourning for the man who had been performing his civic and professional duties until the very end and paid the ultimate price for letting people know the truth, for people’s right to have objective and many-sided information,” Naryshkin said.

“It is untenable that journalists become victims of the crisis in Ukraine,” the Russian lawmaker emphasized.

On Wednesday morning, Dmitry Kiselev, the Director General of the International Information News Agency Rossiya Segodnya, said that Russian investigators confirmed that Stenin died near the city of Donetsk a month ago.

The photojournalist was in a vehicle, traveling in a convoy of at least 10 vehicles carrying civilians and guarded by several members of self-defense forces, when it burnt out after coming under heavy fire from the Ukrainian military.

The Russian Ministry of Foreign Affairs asked Kiev to carry out a thorough investigation into Stenin's murder, the fourth Russian journalist killed in eastern Ukraine in recent months.

Ukraine’s National Security and Defense Council denied any involvement of Kiev’s militants in the tragedy, while the Ukrainian Foreign Ministry assumed that Stenin could have been killed by self-defense forces.